On January 27, Xiomara Castro was sworn in as president of Honduras after a decisive win in the November 28, 2021 general election. The incoming government inherits an economy struggling to recover from the COVID-19 pandemic as well as from two devastating hurricanes in 2020. Even without these crises, the situation is challenging: the 2009 coup that overthrew the democratically elected government of Castro’s husband, Manuel Zelaya (2006–2009), was followed by 12 years of National Party rule marred by endemic corruption, electoral fraud and interference, social unrest, and violent state-led repression.

In 2009, 2013, and 2017, the Center for Economic and Policy Research (CEPR) published research on the evolving social and economic situations in Honduras. This post will do the same, in order to provide more context to Castro’s historic inauguration.

Economic growth: From 2006 to 2008, Honduras experienced steady annual per capita GDP growth averaging 3.3 percent[1], higher than in El Salvador and Guatemala, but significantly less than in Costa Rica.

In the decade following the 2009 coup in Honduras and the global recession (2010–2019), Honduras averaged per capita GDP growth of just 1.8 percent per year, higher than Guatemala, but below El Salvador and Costa Rica. However, the decline in average per capita GDP growth from the pre-coup period to the post-coup period was 1.5 percentage points, the largest drop among these countries, except for Costa Rica.

In 2020, under the weight of the pandemic-induced recession, the Honduran economy contracted more heavily than all of these Central American neighbors, seeing a drop in per capita GDP of more than 10.5 percent. This was also due in part to the economic effects of Hurricanes Eta and Iota, which hit Honduras less than two weeks apart in November 2020.

Despite a partial recovery in 2021 — outpaced by neighboring Guatemala and El Salvador, though slightly stronger than Costa Rica — Honduras’s per capita GDP in 2021 was still lower than it was as far back as 2015. 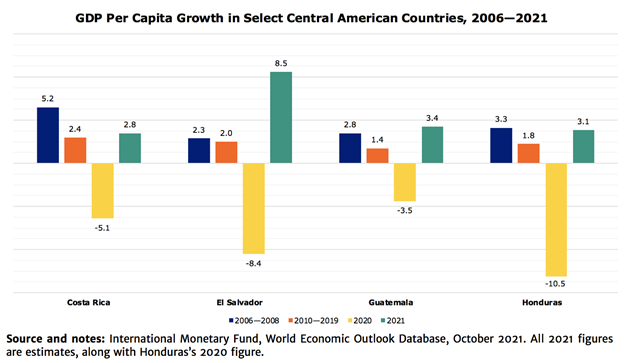 Poverty:[2] Addressing poverty will be an important task for the Castro administration. Poverty trended downward in the 2005–2009 pre-coup era, dipping below 60 percent. But after the coup, from 2010 to 2018, the number of households living in poverty remained above 60 percent. This figure reached as high as 66.5 percent in 2012 before trending downward to 59.3 percent in 2019.

The pandemic and its subsequent economic recession erased those modest gains, however. As noted in a Honduran government estimate from July 2021, the poverty rate reached as high as 73.6 percent, with 53.7 percent of households in extreme poverty, the highest level for both measures in the entire period from 2005 to 2021. 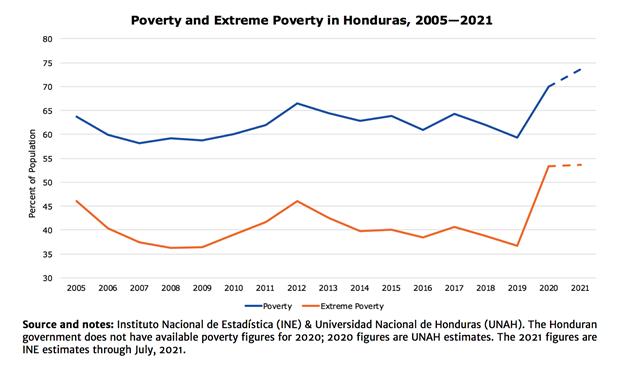 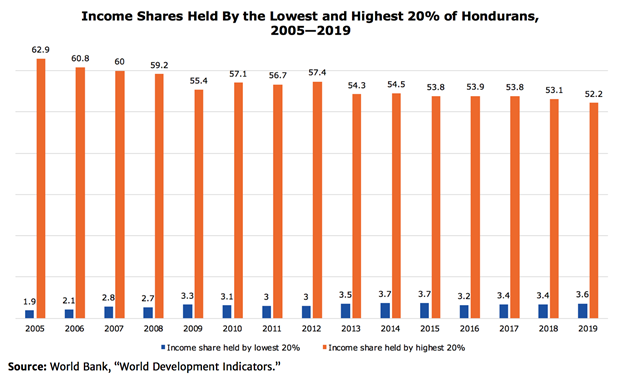 However, these modest reductions in inequality were concentrated in the pre-coup era. The income share for the poorest 20 percent rose by 74 percent (1.4 percentage points) from 2005 to 2009, yet it only rose by 9 percent (0.3 percentage points) over the next 10 years. 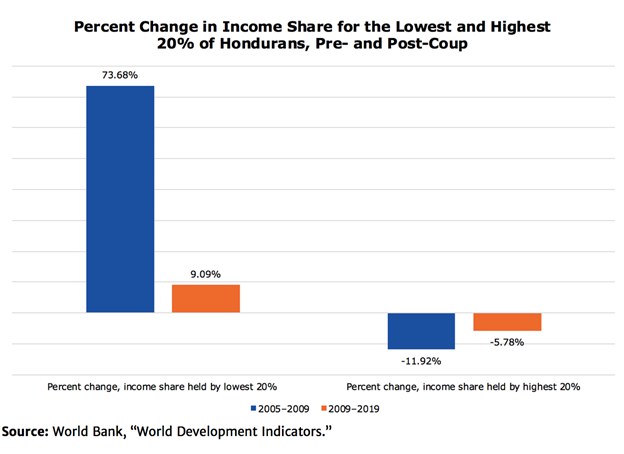 Unemployment:[3] Headline unemployment figures only provide part of the picture of the labor market, especially in developing countries such as Honduras that have large informal work sectors. The graph below shows total underemployment, which includes unemployment and subemployment.

In contrast, underemployment trended upwards in the decade since the coup — dropping to pre-coup rates briefly in 2014 — before exploding to 81.6 percent in 2020. Unemployment followed a similar, but more muted trend, before also jumping to 10.9 percent in 2020.

In 2021, these figures decreased, but not enough to reach pre-pandemic levels — much less pre-coup levels. 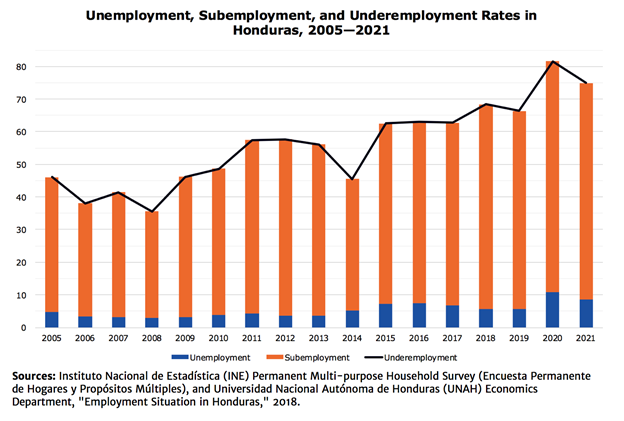 In many countries, the COVID-19 pandemic has had an especially disproportionate impact on women’s participation in the labor force, and this holds true in the case of Honduras. Underemployment among women increased to a shocking 84.6 percent in 2020. This is more than a 20 percentage point increase from 2019, and affected over 385,000 additional women in a country with a total population of less than 5 million women. In contrast, the underemployment rate for men had a much more muted increase in 2020.

In 2021, unemployment for men recovered more significantly than it did for women, suggesting that underemployment for women may remain higher than for men in the near future. 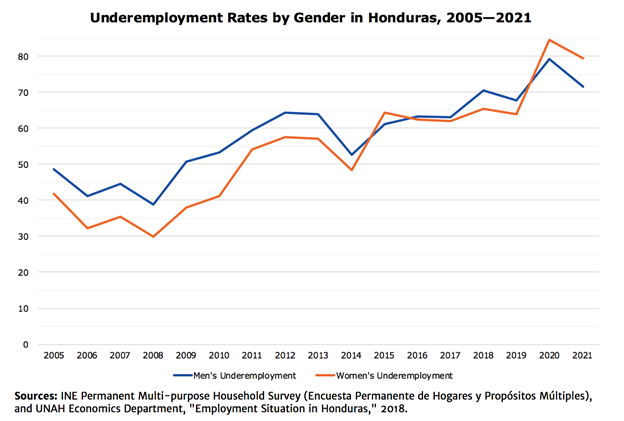 Remittances: Remittances to Honduras — the vast majority of which come from family members living in the United States — represent a significant portion of the Honduran economy. Honduras’s remittances received as a percent of GDP track closely with neighboring El Salvador’s, and are vastly higher than both Guatemala and Costa Rica’s — the latter being a country in which remittances play a very small role in the economy. This reflects, in part, decades of migration flows from Honduras and El Salvador due to poor social and economic conditions and increased insecurity.

That figure could reach as high as 28 percent for 2021, due in part to Honduras’s modest economic growth, as discussed above, and because of an increase in the volume of remittances. It is estimated that from 2020 to 2021 alone, the total value of remittances Hondurans received increased by more than 20 percent. 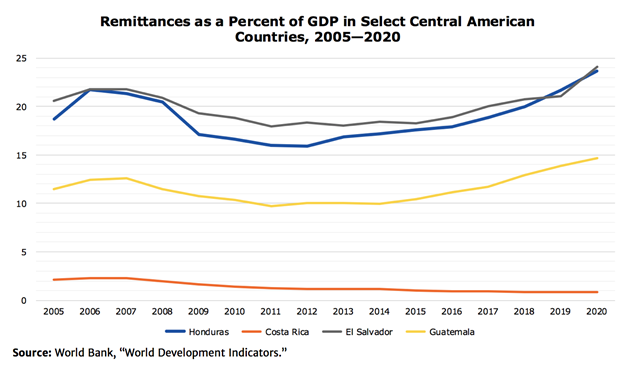 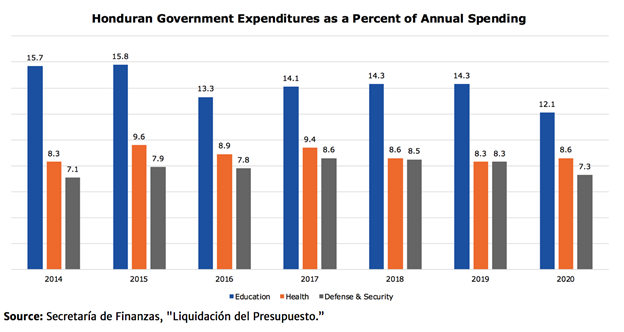 COVID-19:[5] COVID has caused more than 10,000 reported deaths in Honduras since the pandemic began, a mortality rate higher than in both El Salvador and Guatemala. Honduras has managed to vaccinate less than half of its population based on the latest data, which is significantly lower than for Costa Rica and El Salvador, though 15 percentage points higher than for Guatemala. 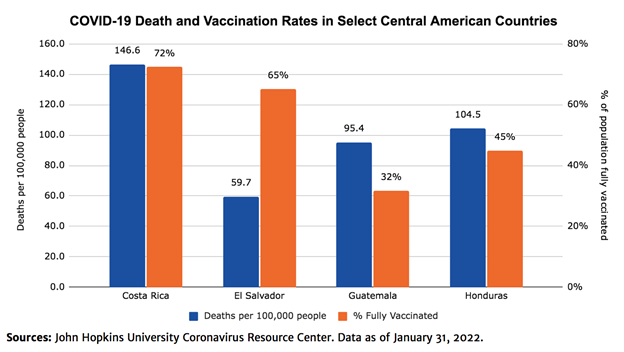 Public debt: Better management of the country’s debt burden will be an important task for the incoming government, as President Castro noted in her inaugural address. In the pre-coup era, both debt as a percent of GDP and interest payments as a percent of GDP declined and somewhat stabilized.

After the coup and global recession, both debt and interest payments as a percent of GDP generally trended upward and reached highs during the pandemic. Countries for whom interest payments represent a large portion of their external debt service can be in an unsustainable position, especially when the external debt is held mostly in foreign currencies (as is the case in Honduras).

Recent IMF projections for Honduras, however, show Honduras’s debt as a percent of GDP peaking in 2020 before beginning to slowly decline over the next four years. 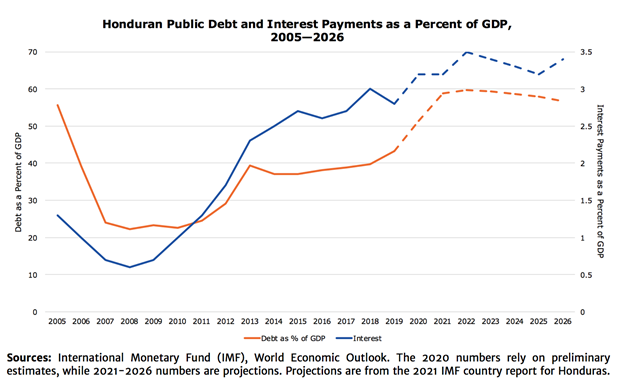 [1] Data for 2009 are excluded in this graph. Per capita GDP growth figures for that year reflect the effects of the global economic recession.

[2] Honduras defines poverty as those households whose income is less than the cost of the market basket, which includes basic provisions and needs such as housing, education, heath, and transportation. Extreme poverty is a measure of households that have a per capita income below the cost of a basic food basket. In 2020, Honduras released a new methodology for measuring poverty. This new methodology results in a significantly lower poverty rate — by nearly 20 percent — than the original methodology. The above graph employs the original methodology and is consistent with prior CEPR research.

[3] Honduras defines as unemployed all those who are not employed, yet desire to be, and have searched for employment during the four weeks prior to the time of the survey. Underemployment includes unemployment and subemployment. Subemployment is a measure of labor insecurity which includes workers who earn less than the minimum wage or work fewer hours than they would like, and thus provides a more complete picture of the labor market.

[4] Data on 2021 expenditures are not yet available. Expenditures data include central and decentralized government spending.

[5] Excess deaths, instead of deaths per 100,000 people, would likely be a more accurate measure of mortality due to the pandemic. However, excess deaths data for many countries, including Honduras, are not widely available. Because Costa Rica is about 3.5 times richer than Honduras on a per capita GDP basis, and a little less than 2.5 times richer than El Salvador and Guatemala, it may have health infrastructure that more accurately accounts for COVID-19 mortality. This might suggest that El Salvador, Guatemala, and Honduras’s performance in preventing COVID-19 deaths is overstated when compared to Costa Rica.

Brett Heinz is the Program Assistant for CEPR’s International Team.