IMF Economists Discover Some of the Big Failures of Neoliberalism: About Time

The International Monetary Fund (IMF) has gotten some attention in the past week for the publication of an unusual article in its quarterly magazine, Finance and Development. The article’s title, “Neoliberalism: Oversold?” itself is a shocker, since the institution has been the most influential proponent of neoliberalism in the world for more than four decades. It’s kind of like an op-ed from Donald Trump titled, “Insulting Your Opponents: Oversold?”

[T]here are aspects of the neoliberal agenda that have not delivered as expected. Our assessment of the agenda is confined to the effects of two policies: removing restrictions on the movement of capital across a country’s borders (so-called capital account liberalization); and fiscal consolidation, sometimes called “austerity,” which is shorthand for policies to reduce fiscal deficits and debt levels. An assessment of these specific policies (rather than the broad neoliberal agenda) reaches three disquieting conclusions:

• The benefits in terms of increased growth seem fairly difficult to establish when looking at a broad group of countries.­

• The costs in terms of increased inequality are prominent. Such costs epitomize the trade-off between the growth and equity effects of some aspects of the neoliberal agenda.­

• Increased inequality in turn hurts the level and sustainability of growth. Even if growth is the sole or main purpose of the neoliberal agenda, advocates of that agenda still need to pay attention to the distributional effects.­

But the overall failure of the neoliberal agenda has been evident since the turn of the century, for anyone who cared to look at the data. The authors note: “There has been a strong and widespread global trend toward neoliberalism since the 1980s …” So, if an experiment has been conducted in scores of countries over a twenty-year period, why not look and see how the average country has done as compared with, e.g., the previous twenty-year period?

Of course we would need to control for the problem of “diminishing returns,” i.e. we would not expect countries to achieve the same rates of growth (or improvements in life expectancy, infant mortality, and other social indicators) as they reach higher levels of income. But that is easily done: instead of comparing the same countries’ performance from 1960–1980 with that of 1980–2000, we can look at all of the countries that started out at a certain level of income (or life expectancy, etc.) in 1960, and see how they did over the ensuing 20 years, as compared with the countries that started out at the same level in 1980.

Here is the result, for between 110 and 165 countries, depending on the starting year (for more discussion, see chapter 3 of my recent book, “Failed: What the Experts Got Wrong About the Global Economy,” Oxford University Press, 2015): 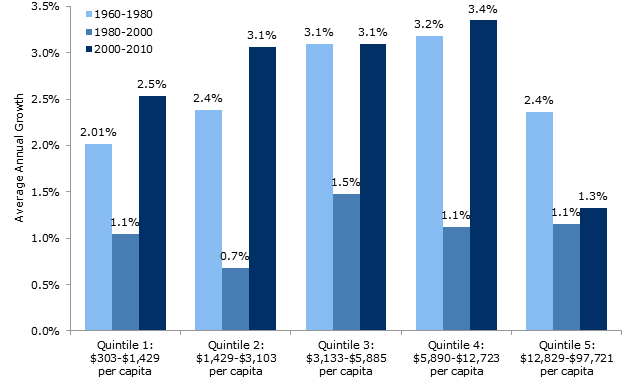 Source: Mark Weisbrot and Rebecca Ray, “The Scorecard on Development, 1960-2010: Closing the Gap?”

There is a striking decline in per capita GDP growth from the 1960–1980 period, to the neoliberal era of 1980–2000. For quintile 2, the difference between 2.4 percent annual growth and 0.7 percent growth means that average income grew by 61 percent from 1960–1980 — when the typical developing country was doing everything that neoliberal economists decided was wrong — to just 15 percent in the era of neoliberal reforms.

Not surprisingly, the results are similar for life expectancy, infant and child mortality, and other social indicators.

But just looking at the growth of income per capita, it is difficult to explain such an epoch-making decline, in the face of such widespread adoption of a set of policy reforms in so many countries, as anything other than a major policy failure. No one has put forward a plausible alternative explanation. And so it is good to see that, finally, even some economists at the IMF are beginning to point to some of the policy failures, although these are a restricted set of neoliberal policies. (I would include overtly tight monetary policy, the increasing “independence” of central banks, the abandonment of state-led development strategies and industrial policies, and indiscriminate opening to trade, as among the policies that contributed to the slowdown.)

The above graph also shows a rebound in the first decade of the 20th century. This is another story (see “Failed” for details); but for now we can just say it was not a case of the neoliberal reforms of yesteryear finally working their delayed magic. On the contrary, part of the rebound was due to much more expansionary macroeconomic policies in response to the world recession, as compared to the recessions of the 1980s. And part of it was the impact of China, one of the few large developing countries that did not adopt the neoliberal reforms of the 1980s and 1990s, and was propelled by record growth to become the largest economy in the world. Its imports from low- and middle-income (non-OECD) countries grew from just 0.2 percent of these countries’ GDP in 1980 to 3.1 percent in 2000, helping to pull dozens of countries out of their long growth slump.

All this should make people rethink a bit about how neoliberalism has changed the world.

PREVIEW: What to Look for In the First Quarter 2021 GDP Report

The Biden Recovery: How’s That Hopey Changey Thing Working Out for You?