It's Monday Morning and Robert Samuelson is Confused About the Economy

Most of his problem stems from the fact that he seems to have forgotten that we are still in a downturn, with the economy operating at a level of output that is more than $1 trillion below its potential according to the Congressional Budget Office. This means that when he complains about the impossibility of finding a political path to closing the structural deficit due to the growth of social spending (“welfare” to Samuelson), he is complaining about a problem that does not exist.

The most recent projections from the Congressional Budget Office show a baseline deficit projection for fiscal 2014 of around $600 billion. If the economy were operating at potential GDP, this would reduce this figure by around $300 billion. (An additional dollar of output will lead to roughly 30 cents in savings to the government due to higher tax collections and lower payments for programs like unemployment benefits and other transfers.)

It is true that in the longer term the deficit is projected to rise due to the rising cost of health care. The United States pays more than twice as much per person for its health care as other countries with nothing to show for this spending in terms of outcomes. Unfortunately, political debate in Washington is dominated by hard-core protectionists like Samuelson and the Washington Post editorial board who refuse to even consider plans to open up U.S. health care in ways that would reduce the income of doctors, drug companies, and insurers.

The high price of health care in the United States imposes an enormous burden on the economy and the budget. If the U.S. paid the same per person costs of health care as people in other countries we would be looking at enormous surpluses for the rest of the century, not deficits. Rather than reducing the extent to which the rich benefit from waste in the health care system, Samuelson and others want working people to get by with less care. 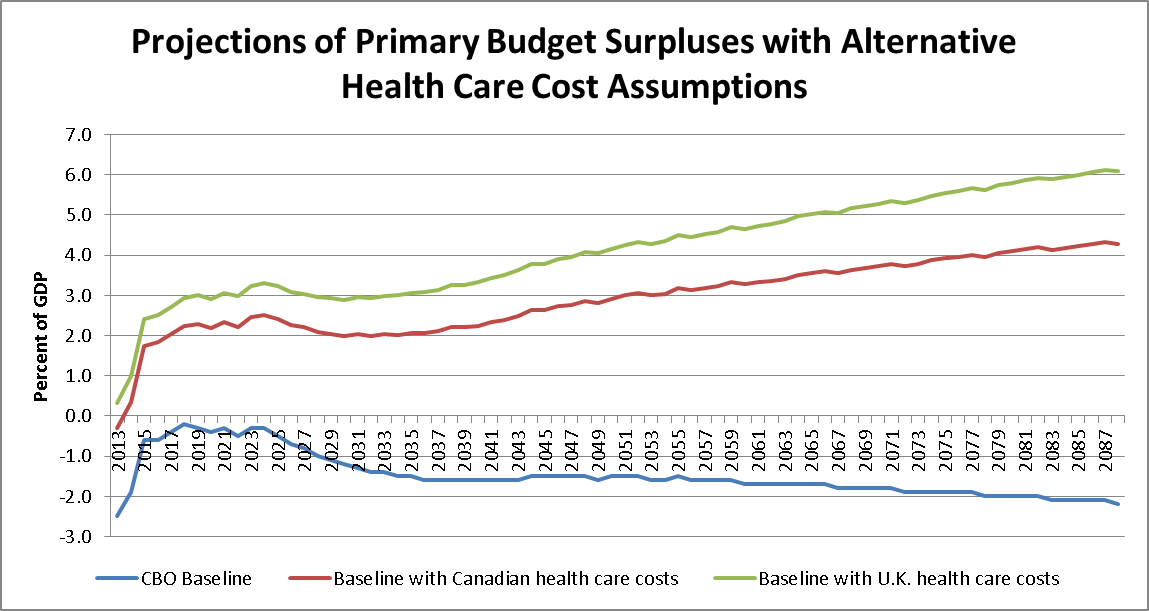 Samuelson is also wrong on other parts of his pessimism, most obviously he can’t seem to find his way over the Bureau of Labor Statistics website. He told readers:

This is wrong. Our friends at the Bureau of Labor Statistics tell us that the labor force participation rate for women over age 20 went from 60.5 percent in 2006 to 60.6 percent in 2007. It dropped after the recession started at the end of 2007.

The basic story is that we are certainly seeing slow growth now, but this is because Congress is working hard to roll back sources of demand, most importantly government spending. For reasons that no one can explain we are not supposed to even talk about raising demand through reducing the value of the dollar and thereby increasing net exports.

As Keynes taught us almost 80 years ago, with weak demand the economy will grow slowly. We know how to fix this — spend money — but that is not in fashion right now. Instead, high unemployment and slow growth is the rage, but this is by design, not a fact of nature.