• ARTICLE Economic Crisis and RecoveryGlobalization and Trade Beat the Press

One of the points I made in that post was that excessive demand could be siphoned off in the form of a larger trade deficit, thereby limiting the extent to which it creates inflationary pressures in the United States. I  thought I would show the fourth-quarter data on the growth in GDP and the growth in the trade deficit to make this point. 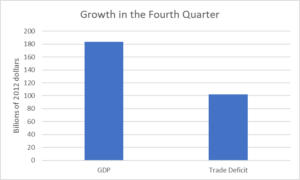 As can be seen, the increase in the trade deficit in the fourth quarter was over 55 percent of the size of the growth in GDP. The point is that excessive GDP growth can quickly be siphoned off in the form of a trade deficit. This is of course not ideal, we would rather see growth in the U.S., but if the economy is really seeing excess demand that it can’t meet, an increased deficit is preferable to an inflationary spiral.

To understand how this can work, imagine that the economy of a particular state is really booming, with extraordinarily low unemployment. We see this on occasion, as for example when a state has an oil boom pushing its unemployment rate to very low levels, and pulling in workers from other states. In such situations, we may see an increase in house prices and the prices of a limited number of services, but we don’t see a wage-price inflationary spiral.

Given our high degree of globalization, even if we did push the economy too far, we are more likely to see something like what happens in a state experiencing an oil boom, rather than the U.S. economy in the 1970s. This supports the case that the downside risks of pushing too far are much smaller than the risk of not pushing far enough.

People Are Not Spending Down Their Savings II

Solar Power, Time, and Steel: Someone Needs to Tell the NYT That It’s Not 2021 Anymore