On October 10, less than a week after Hurricane Matthew ripped across Haiti, the United Nations launched an emergency appeal for $120 million. Ten days later, donors have failed to fill the need, contributing just over 20 percent of the funds deemed necessary. But whom is the money being raised for? What planning or coordination went in to the $120 million ask? Are donors right to be hesitant?

An analysis of UN Financial Tracking Service data shows that the vast majority of the funds raised are destined for UN agencies or large, international NGOs. Reading press releases, government statements and comments to the press, it would seem that many lessons have been learned after the devastating earthquake of 2010: the importance of coordinating with the government, of working with local institutions and organizations, of purchasing goods locally and of building long-term sustainability in to an emergency response.

But, as one Haitian government official posed it to me, “we all learned the lessons, but have we found a solution?” Based on the UN Office for the Coordination of Humanitarian Affairs (OCHA) appeal, the answer is not yet.

Perhaps this should be of little surprise, the flash appeal is designed specifically to “fund United Nations aid activities” for the next three months, not to raise money for local organizations, the Haitian government or for long-term, sustainable projects.  But the analysis is nonetheless revealing.

The appeal is largely based on individual projects from individual organizations, and does not appear to have been launched with input from the Haitian government. As can be seen below, the vast majority of funding is destined for UN agencies. 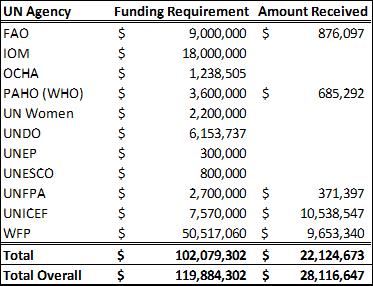 Looking at the above chart, one sees that 85 percent of the funding requested is for the UN’s own agencies and that, of the $28 million provided so far, 79 percent has gone to these same entities.

Of the remaining $17 million for other organizations, it is overwhelmingly allocated to large foreign NGOs such as CARE and Save the Children. Haitian organizations or institutions appear to have an extremely limited role in the appeal, if one at all.

Importance of Coordination and Long-Term Sustainability

There has also been an acknowledgement that more must be done to both coordinate with the Haitian government and the various actors on the ground and to focus earlier on in building long-term capacity. But the OCHA appeal does not have an emphasis on either.

As can be seen, about 50 percent of the total requirement is for the food security, nutrition and emergency agriculture sector. There is no doubt that agriculture production and food security are some of the largest concerns going forward, but most of these funds, $46 million, is for short-term food assistance through the World Food Program (WFP). On the other hand, just $9 million will go towards “restoration” of “rural productive capacity.” The WFP program has already received $7.4 million, while the restoration project has only received $800,000.

Again, this is not to say that emergency food assistance is not needed, but it must be a part of longer-term sustainable projects to rebuild agriculture capacity as well. The OCHA appeal, while focusing on emergency needs, could also raise funds for needed capacity building. Funds from donors and private individuals come mostly after a disaster, but if all the money raised simply goes to emergency needs, there is nothing left to build for the long term when donor funds will be even scarcer.

Coordination and support services, on the other hand, is only the target of 1.2 percent of the overall appeal. However, this appears to be one of the most significant bottle necks in the distribution of assistance right now in Haiti. The Haitian government has pledged to take the lead in coordinating the international and local response, but lacks the necessary capacity? or willingness from donors? to make that a reality. The OCHA appeal does attempt to raise funds to support the government’s coordination efforts, but only $193,000, and that would go through the UN Development Program. That project remains 0 percent funded as of now. In fact, despite the low targets for the sector, no funding has thus been channeled in to this important area.

On his visit to Haiti last week, UN Secretary General Ban Ki-moon expressed “disappointment” with donors, who had yet to commit funds. “I know there is some fatigue from certain countries, but the current situation, the current disaster that hit this country through Hurricane Matthew is beyond description,” he said.

“The United Nations stands by your side. We will mobilize all resources to help you,” Ban continued. Speaking yesterday directly to donor governments, Ban once again criticized the slow response, saying “We urgently need more resources.”

Provisional president of Haiti Jocelerme Privert struck a slightly different tone in his remarks with Ban last week: “There will always be hurricanes, there will always be catastrophes. We need concrete actions to mitigate the damage from the next hurricanes that have not hit yet,” he said.

Those are the types of actions that failed to materialize after the 2010 earthquake, and that do not appear to be addressed through this latest UN appeal for funds.  Everyone learned the lessons, but Haiti needs solutions.