Piñera Praises Chávez at CELAC Summit; Media Influences Public Opinion on Venezuela But Not So Much Governments 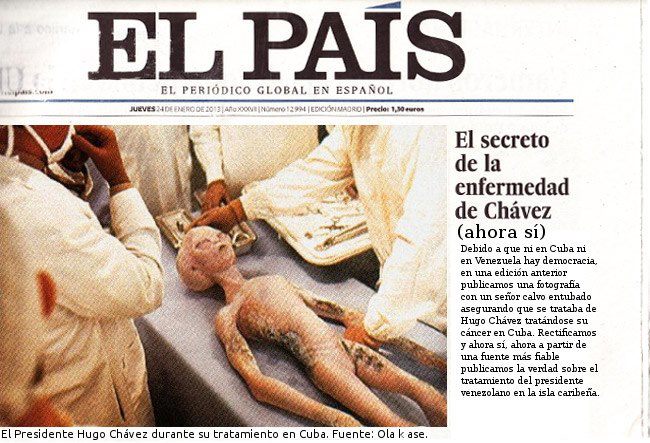 Image: This satire of El País’ publication of a fake photo of President Hugo Chávez on its front page last week captures the quality of much media reporting on Venezuela.  El País is the most influential paper in Spain and has much influence also in Latin America.

In writing about the media’s ongoing hate-fest for Hugo Chávez, I pointed out that the major media’s reporting had been effective, in that it has convinced most consumers of the Western media – especially in the Western Hemisphere and Europe – that Venezuela suffers from a dictatorship that has ruined the country.

But there is an important sense in which it has failed.  Of course it has failed to convince Venezuelans that they would be better off under a neoliberal regime, and that is one reason why Chávez and his party have won 13 of 14 elections and referenda since he was first elected in 1998.  Perhaps of equal importance, it has also failed to persuade other governments that President Chávez is motivated by some kind of irrational hatred of the U.S. – as the media generally reports it.  Most foreign ministries have some research capacity, and although they are influenced by major media, at the higher levels they have better information and make their own evaluations.

That is why Chávez has been able to play a significant role in the growing independence and regional integration of Latin America, despite his vilification in the media, and years of effort by the U.S. government to isolate Venezuela from its neighbors.  For example, the governments that decided to form the Community of Latin American and Caribbean States (CELAC) – a new hemispheric organization including all countries other than the U.S. and Canada – don’t care whether the media dismisses it as “Chavez’s project.” When Brazil, Argentina, and Uruguay decided to admit Venezuela as a full member of the trading bloc Mercosur, they didn’t care what the media in any of their respective countries would say about it.

Of course the left governments of Argentina, Brazil, Ecuador, Bolivia, Uruguay and others have been quite sympathetic to Chávez and see him as a very important ally.  But the region has changed so much in the last 10 or 15 years that it is not only the left governments who appreciate him.  Here is what one of the only remaining right-wing presidents in South America, Sebastián Piñera of Chile, said on Sunday about Chávez, in Santiago:

I want to acknowledge a President who is not with us today, but whose vision, tenacity and strength has had a profound impact on the creation of the CELAC.  I refer to President Hugo Chávez, the father of this regional group that welcomes all nations of Latin America and the Caribbean, 33 in all, and which excludes only two countries on the continent: the United States and Canada.  We are all hoping for you to win this battle, perhaps the toughest battle of your life, which you are doing with the same strength and courage as always, and that you regain your health and that you can return in full capacity as President of Venezuela.

Back in 2006, the New York Times ran a front-page news article with a large-type headline: “Seeking United Latin America, Chávez is a Divider.”  The thesis was being pushed by the Bush State Department, and was echoed by the anti- Chávez sources cited in the article.

How completely wrong they turned out to be.