The Child Credit Absolutely Shouldn’t Have an Earnings Test — But If It Does, It Should Apply to Married Mothers

Sen. Joe Manchin (D-WV) has called for adding “work requirements” to the expanded Child Tax Credit (CTC) currently moving through Congress as part of the Build Back Better Act. Manchin was dismissive when initially asked by Tara Golshan of the HuffPost to expand on “what kind of work requirements he’d like added to the benefit, saying they were ‘self-explanatory.’”

Yet, more than self-explanation is necessary because the expanded CTC already has a work requirement. The expanded CTC is conditional on raising a minor child, and, as Sen. Sherrod Brown (D-OH), among others, has noted: “raising children is work.” 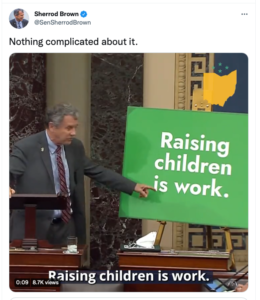 Of course, the expanded CTC doesn’t directly or fully compensate parents for the socially necessary, but unpaid, work of raising children. At $3,000 a year per child ($3,600 if the child is under age 6), it is far too modest to do that. But it is a form of public support and recognition of the valuable essential work that parents do when they raise children.

What Sen. Manchin really wants is better described as an “earnings test” or a “W-2 test.”  As he later told a reporter at Business Insider, “I’m even willing to go as long as they have a W-2 ….”

A lot has already been written about why applying an earnings test to the expanded CTC is a horrible idea that would disproportionately harm working-class children. In addition to placing no value on the unpaid work of parenting done by parents and other primary caregivers without current market income, it would increase the paperwork and other administrative burdens placed on millions of parents with market incomes. It will also make it much more difficult to pay the expanded CTC on a monthly, rather than annual, basis. Since working-class parents pay for housing, utilities, groceries, and a long list of other basics on at least a monthly basis, it’s just common sense to provide the expanded CTC to parents on the same monthly basis.

There is, however, an important question Sen. Manchin has not addressed, and that has received little public discussion to date: will both parents in a married parent household need to pass his proposed earnings test, that is, will they both need to provide W-2’s?

Most conservative supporters of an CTC earnings test clearly think only one parent in a married parent household should have to meet the earnings test. But the arguments made to support an earnings test for one parent in a benefit unit receiving the CTC can just as easily be used to argue for applying individual earnings tests to both parents in a married parent benefit unit. Moreover, denying a basic child benefit to children of solo mothers without earnings, while at the time providing it to children of married mothers without earnings — as long as they are living with a spouse with earnings about a very low level — is deeply unfair to solo mothers and their children.

To put the matter in terms of conventional economics, both the CTC and the existing Earned Income Tax Credit (EITC) provide an incentive for parents in a married parent couple, typically the mother, to reduce their labor supply. Requiring both parents in a married parent unit to provide W-2’s for their children to receive the EITC and CTC would reduce this incentive.

This dual earner test would also reduce the amount of EITC and CTC benefits received by married parents, either by cutting them completely off these cash benefits if they both refuse to obtain employment, or, if they both get jobs, reducing the amount of the means-tested cash benefits they are eligible to receive, as well as their eligibility for noncash benefits like Medicaid, the Premium Tax Credit, and the Supplemental Nutrition Assistance Program. I think this would be a very bad result, but it’s a result that would be consistent with the logic of conservative arguments for an earnings test in the expanded CTC.

The normative arguments that US conservatives make for a CTC earnings test can be grouped into three categories: reciprocity, self-improvement, and self-sufficiency. Consider the arguments of one of the most vocal supporters of adding an earnings test, Oren Cass,  the director of American Compass, and formerly a management consultant at Bain Capital and Domestic Policy Director for Mitt Romney’s 2012 Presidential Campaign. (Romney, it should be noted, has recently taken a very different position. Earlier this year, he proposed turning the EITC and CTC into a unified child allowance with no earnings test).

Cass’ thinking here may be the old-fashioned kind that assumes that it’s really only unmarried parents living on their own who receive means-tested benefits, while married parents all live in nuclear families and rely almost exclusively on wages, employer-provided benefits, and very occasional help from non-means-tested programs like unemployment insurance.

If so, Cass needs to update his thinking. As the US GAO documented in a 2015 report to Congress, among households with children, most people who receive one or more means-tested benefits lived in married couple households.

Notes: Means-tested benefits in this table are: the ACTC, the EITC, housing assistance, LIHEAP, SNAP, TANF, SSI, and WIC.

The GAO report doesn’t estimate how many children and married parents receiving these means-tested benefits live in units where the mother is not employed, but it is likely to be substantial. If these married mothers obtained paid employment, it would generally reduce their so-called “dependence” on means-tested public benefits, but Cass and other conservative proponents of earnings tests have not taken this step.

In fact, Cass recognizes that many non-employed mothers are “striving to support themselves but under pressure from the demands of child-rearing,” but this is a recognition he only extends to married mothers, and denies to unmarried ones.

Conditionalities have their place in various parts of a comprehensive social security system. It’s not unreasonable to condition unemployment insurance on making attempts to find employment (although the devil is in the details) and student financial assistance for college on actually going to college.