The High Cost of Transforming Europe: Why Europe Stumbled

Paul Krugman posted an interesting note a few weeks ago that deserves a lot more attention. He shows this graph of real GDP per working age adult for the U.S. and Europe, and notes that the U.S. and European recoveries from the great recession were similar at first by this measure (that is, adjusting for population growth): 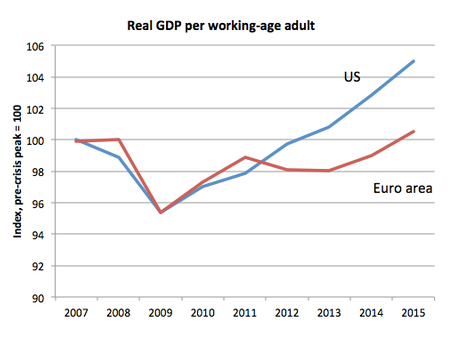 But then the U.S. keeps recovering while Europe slides into a second recession. Why? Krugman explains:

What was happening in 2011-2012? Europe was doing a lot of austerity. But so, actually, was the U.S., between the expiration of stimulus and cutbacks at the state and local level. The big difference was monetary: the ECB’s utterly wrong-headed interest rate hikes in 2011, and its refusal to do its job as lender of last resort as the debt crisis turned into a liquidity panic, even as the Fed was pursuing aggressive easing.

This is all true but I think it is important to remember what the European Central Bank (ECB) was doing when the “debt crisis turned into a liquidity panic.” The ECB, together with its partners in the European Commission and the International Monetary Fund (IMF), was using and prolonging the financial crisis in the eurozone in order to force the more vulnerable governments (i.e. Greece, Spain, Portugal, Ireland, Italy) to adopt policies that their electorates would never vote for. Among these were cutting government employment and social spending (including health care and pensions), labor market “reforms” that reduced the bargaining power of unions, reducing employment protections, and other unpopular measures that could be expected to redistribute income upward and reduce the living standards of the majority.

In my book, Failed: What the Experts Got Wrong About the Global Economy, I examine some of the details of this process by which the European authorities repeatedly sent the eurozone to what looked like the brink of financial meltdown in order to achieve this leverage. The authorities’ political agenda was amply documented in dozens of IMF Article IV papers with EU countries during the crisis years. (These are papers that result from regular IMF consultations with governments; the recommendations that are recorded represent a sort of elite consensus including finance ministries and IMF economists).

This recent history is very important, because the monetary policy that Krugman rightly blames for Europe’s additional two years of recession was more than policy mistakes or dogma, it was an essential component of a very deliberate attempt to transform Europe into a different kind of society.

We know this from the IMF papers and also from the fact, which Krugman alludes to, that ECB President Mario Draghi put an end to the financial crisis with just three words: in July 2012 the ECB would do “whatever it takes” to preserve the euro. After that, the yields on 10-year bonds for Spain and Italy — the too-big-to-fail debtors whose solvency was necessary to avoid financial catastrophe — fell sharply, and continued to fall and stay low for years. Of course the ECB could have done this at any time (Draghi himself had been at the helm of the Central Bank for eight months in July 2012).

Krugman correctly notes that the ECB’s stance in 2011–12 may have created “enduring weakness” in the Eurozone, which we still see today. But it would be good for the world to know just what the European authorities were trying to do when they created this mess.

Transcript: “Making the Most of Special Drawing Rights: Approaches to Maximize Impact and Create a Sustainable and Just Recovery”