It is getting almost as bad as propaganda from an authoritarian regime. We keep hearing major news outlets tell us that inflation is whacking lower-income families. The Washington Post did it yesterday in an editorial demanding more rate hikes from the Fed to throw people out of work.

The problem with telling this simple story is that wages have been growing most rapidly at the bottom end of the wage distribution, substantially outpacing inflation since the start of the pandemic. Also, in a tight labor market, more people are likely working in many households. They are also more likely to be able to find a job that has lower commuting costs or might allow them to work part-time to deal with child care or family needs.

One way to assess how these things balance out is to look at what has happened to homeownership rates. More homeownership is not always better, as some of us warned during the housing bubble years, but people who have the option to buy a home generally choose to do so.

Contrary to the propaganda coming from the media, homeownership rates have actually risen rapidly since the pandemic for households with incomes below the median, as shown below. (The big jump in 2020, which was partially reversed, is likely due to a skewing in responses, as the pandemic sent response rates plummeting.) 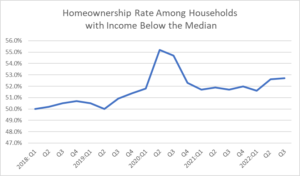 Homeownership rates have also risen for Black and Hispanic households and those headed by someone under age 35. It is more than a bit bizarre that the media have been almost uniformly insisting that these are horrible times for lower-income people despite data that say the opposite.