Too Few Cooks in the Kitchen: A Labor Shortage in the Restaurant Industry?

Kevin Drum at Mother Jones took the Washington Post to task for their recent article on the supposed labor shortage for restaurant cooks. The article explains the shortage by citing rising housing costs and long commutes, poor working conditions, large student loan burdens, and a lack of career prospects. It says that these factors make restaurant jobs undesirable, especially for cooks.

Drum points out that the obvious solution to this problem is raising wages, and that the article never mentions it as a possibility. He says that “[m]aybe there are plenty of good entry-level cooks available” at a wage of $15 an hour instead of a wage of $10 to $12 an hour that the article cites. Drum is right that a higher wage would attract more applicants for these positions. They would also attract cooks and workers in other food service occupations back to the restaurant industry. This would mean that the “shortage” of cooks is probably not a real shortage after all.

Luckily, industry data can be used to look for evidence of wage growth. If there were a shortage, the data would show healthy wage growth. This is because employers would be competing over a smaller pool of workers, and they would use higher wages to attract those workers. If there is low or moderate wage growth, it’s likely that there is no real shortage. 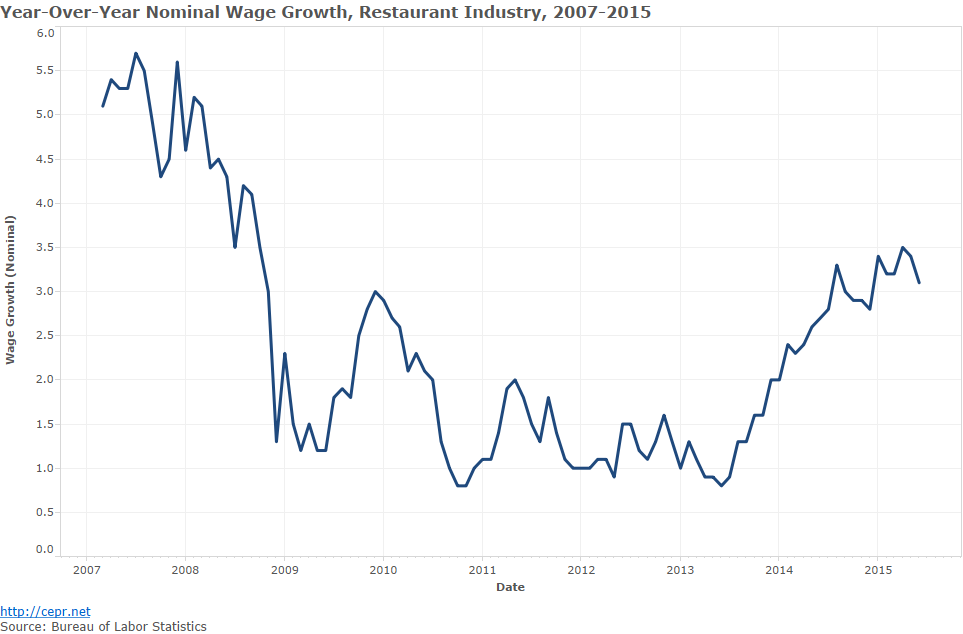 The data show that wage growth in the restaurant sector is moderate, but still around 2.5 percentage points lower than it was before the 2007–2009 recession. Wage data for cook occupations in the Accommodation and Food Service sector is also available. 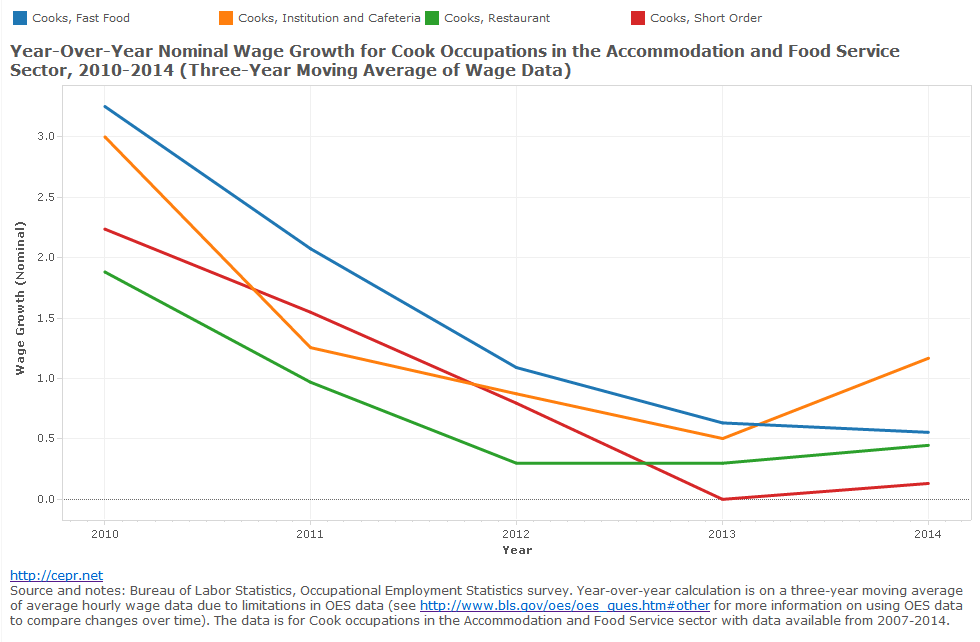 This set of wage data shows very low wage growth for the four main cook occupations. Cooks working at institutions and in cafeterias have seen a small bump in wage growth, but overall, wage growth is very low. Average hourly wages for these occupations are also all below $13 an hour. Restaurant cooks have an average wage of $11.35; fast food cooks, $9.13, institutional and cafeteria cooks, $12.27; and short order cooks, $10.23.

It’s important to note that these two sets of wage data (for the restaurant industry and for cook occupations) show nominal wage growth, not real wage growth. In real terms, wage growth would be even lower. For some occupations, it might even be below zero.

Besides wage data, job openings and unemployment in the Accommodation and Food Service sector can provide a larger picture of the restaurant labor market. 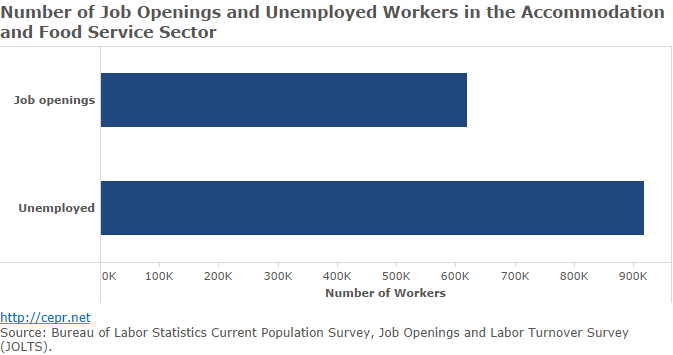 In the Accommodation and Food Services sector, there are 918,000 unemployed workers and 620,000 open positions in July 2015 (not seasonally adjusted). This works out to about 1.5 unemployed persons for every open position, although there is good reason to believe that the Bureau of Labor Statistics’s definition of “unemployed” understates the number of people that are looking for work.

The wage and industry data overall do not give the impression of a shortage of workers in the restaurant industry generally or for cooks specifically. This is consistent with slack in the labor market in general. While the problems that the Post article cites are real (and they might make restaurant jobs less desirable), they are also a convenient way that restaurant managers and owners, as well as the National Restaurant Association, can deflect blame. If employers can’t find workers but haven’t raised their wages or examined whether their skill expectations are reasonable, it doesn’t mean that there is a labor shortage. Unfortunately, claims of labor shortages are a common occurrence, and are often used to push for policies that that erode workers’ power or that shift costs onto the public. This is one of those cases. The evidence suggests that restaurant employers are not facing a shortage of workers and that those in the Post article likely have unrealistic expectations for filling open positions.