USAID Says it Built Houses in Caracol to Earthquake Safety Standards. It Didn’t.

In February, USAID suspended Thor Construction, one of two contractors responsible for designing and building 750 houses in Haiti’s north, in Caracol. In March, the second contractor, CEEPCO, was also suspended. As previous HRRW reporting revealed, the houses were found to be of poor quality, with numerous structural deficiencies including the use of substandard concrete. USAID is currently investigating and putting together a potential legal case against the contractors; however, they continue to downplay the problems and their own role in them.

On its website, USAID has a “fact sheet” on the project, explaining: “To address natural disaster concerns, the 750 houses are designed to International Building Code earthquake and hurricane safety standards, and constructed with reinforced concrete masonry.” The webpage says it was updated in February 2015, nearly a year after USAID first began investigating. There is no mention of any problems with the houses in the “fact sheet.”

Turning to the Army Corp of Engineers report, it makes clear that from the very beginning, International Building Codes were ignored. The report “found no evidence that a formal internal or external review” of the housing design was conducted and further, that “the project was designed with inconsistent application of code and latest design criteria,” despite the contract mandating compliance with the International Building Code. The lack of any oversight provided at this crucial early stage is a clear indictment of USAID’s own role in the project’s failure. 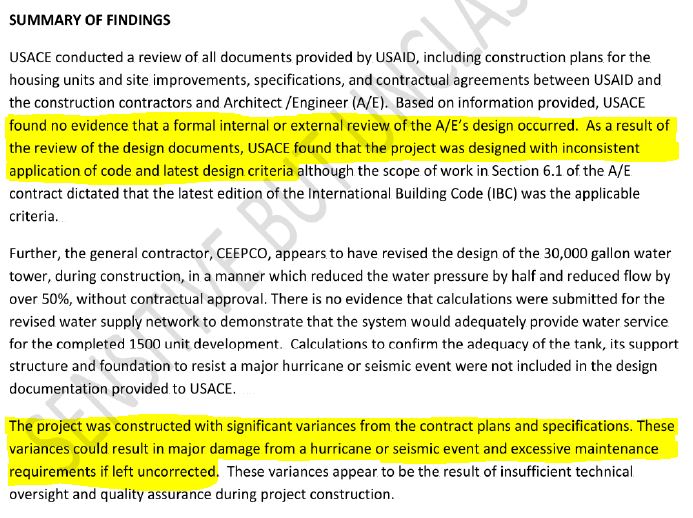 Summary of Findings from US Army Corp of Engineers Technical Assessment

USAID also maintains that the houses are built with “reinforced concrete masonry” and are built to hurricane and earthquake safety standards. Not so fast, says the Army Corp of Engineers: “The project was constructed with significant variances from the contract plans and specifications. These variances could result in major damage from a hurricane or seismic event and excessive maintenance requirements if left uncorrected.”

And as for the reinforced masonry? “Seismic design of the housing units is deficient for construction within an area with high seismic activity. The design does not provide special reinforced masonry shearwalls as required for seismic design classification,” the report found, adding: “Combined with a lack of masonry joint reinforcement, omitted by the contractor, the walls are vulnerable to shear failure and step cracking in a seismic event.” A later report also obtained by HRRW, and prepared as part of USAID’s legal case against the suspended contractors, points out that the concrete used in the masonry is far below the required strength. 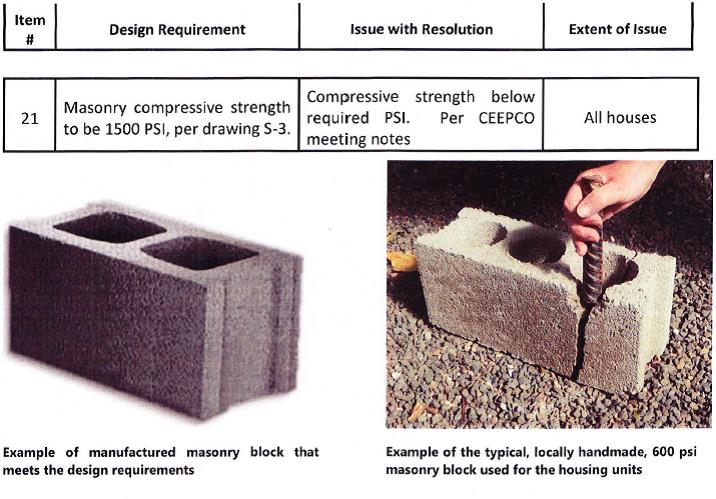 The U.S. responded to Haiti’s earthquake, in which poorly constructed homes contribured to hundreds of thousands of deaths, by committing to facilitate the construction of 15,000 permanent homes in Haiti for $50 million. In the end, they’ve built just over 900 and costs have doubled. But worst of all, 750 of those 900 houses aren’t even built to withstand the next earthquake. In the meantime, residents of the houses are paying monthly rent and after five years will take over ownership of the houses, but what quality of houses are they being asked to pay for? And is USAID being upfront with the community about the extent of the problems?

The Army Corp of Engineers report is available here.