• ARTICLE Latin America and the CaribbeanVenezuelaWorld

Meanwhile, petroleum has grown at just a 1.3 percent average annual rate since its trough in the fourth quarter.  At this rate, it will not reach its pre-recession level for another seven years.

Growth by Industry
Most notable were the contributions of construction and petroleum.  Construction (medium blue in the figure below) contributed nearly half of total GDP growth in the third quarter, even though it represents less than 10 percent of the overall economy.  This is not surprising given the government’s recent housing-construction projects.  Meanwhile, petroleum’s poor showing (dark blue in the figure below) took off 1.1 percentage points from the quarter’s annualized growth.  Petroleum was the only major sector to show a decline in the third quarter. 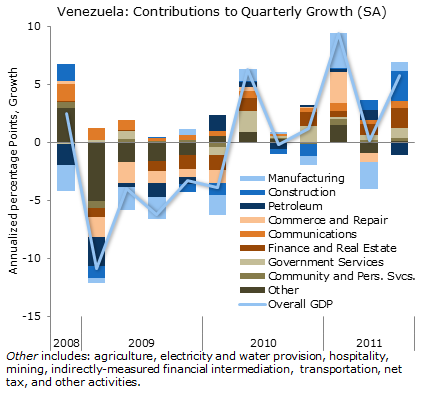 Construction fell by much more than petroleum during and after the recession, but has also rebounded much more quickly.  Between the second and third quarters of this year, it has grown at nearly a 25 percent annual rate, and even though it was still falling through the end of 2010, it has now grown to 10.0 percent above its year-ago level.

Petroleum’s third-quarter decline, at a negative 8.4 percent annual rate, more than offset the growth of the previous quarter.  It has grown just 0.3 percent in the last four quarters, and averaged 1.3 percent growth annually since its trough in the fourth quarter of 2009.  If it continues to grow at an average rate of 1.3 percent per year, it will not reach its pre-recession level for another seven years. 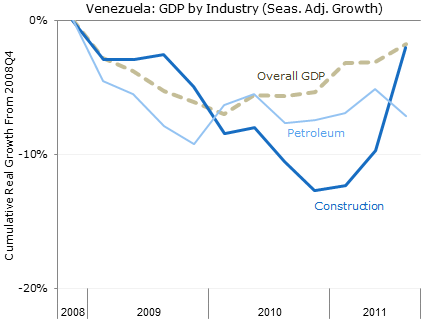 Growth by Expenditure Category
Private consumption grew at a 3.1 percent annual rate in the third quarter, continuing its 3.1 percent average annual growth since the trough in early 2010.  Government consumption grew more quickly in the third quarter, at a 7.1 percent annual rate, but grew more slowly in the previous quarters, bringing year-over-year growth to 4.7 percent.  Gross fixed capital formation has been essentially flat for the last several quarters, growing just 0.4 percent year-over-year and averaging just 1.6 percent annual growth since its trough in early 2010. It is still about 20 percent below its pre-recession level. 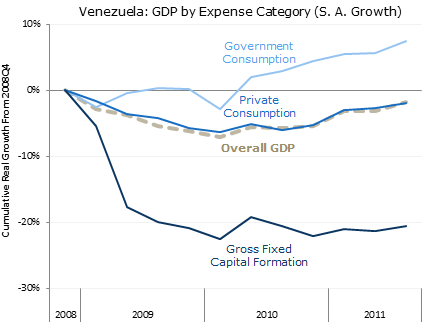 Overall, GDP grew because of public-sector consumption and the construction sector.  Meanwhile, the petroleum sector fell further behind the overall recovery.  It remains to be seen how long the construction boom will last, and how much it will impact other sectors, such as manufacturing.

————
[1]  The source for all data and figures is the Banco Central de Venezuela.