While most of the news from Venezuela has been focused on protests, something that is probably more important for the future of the country has taken place. The black market value of the dollar has plummeted by one-third in the past three weeks, on news that the government is introducing a new, market-based exchange rate. According to the plan, known as SICAD 2 (Sistema Cambiario Alternativo de Divisas), Venezuelans will be able to purchase dollars legally from various vendors including private brokers and banks.

In November of last year I wrote a short piece for Folha de Sao Paulo arguing that the black market dollar price was a bubble, comparable to the real estate bubble in the U.S. in 2006 (or stock market in 1999), and that the government could burst it at any time. Some people were buying dollars because they needed them for various purposes; but also some were making what they thought was a one-way bet. They thought that the dollar was a good store of value because it would continue to rise indefinitely against the domestic currency. Much of the media promoted the idea that Venezuela was headed for hyperinflation (some even erroneously call it that), and so the domestic currency (bolivar fuerte) would continue to lose value until it collapsed.

At the time I wrote about the bubble the dollar was at about 60 bolivares fuertes, but it was already well into bubble territory; it continued to rise to 88 and has now fallen to 58.3. It’s likely to fall further as the SICAD 2 system supplies dollars that were previously being sold on the black market. And if the black market dollar falls, it will bring down inflation, since this has been the main cause (see graph below) of the sharp increase in inflation since October of 2012. There should also be some relief of shortages, since it will be easier for importers to get dollars. Since PDVSA (the state oil company) can sell dollars on this market as well, this should also reduce the government budget deficit.

Of course there are other economic problems, including the pilfering of billions of dollars in foreign exchange at the official rate through the setting up of fake companies, and smuggling subsidized food and gasoline across the Colombian border. But the exchange rate system has been the central economic imbalance, and if SICAD 2 functions as planned it could go a long way towards resolving Venezuela’s current economic problems. 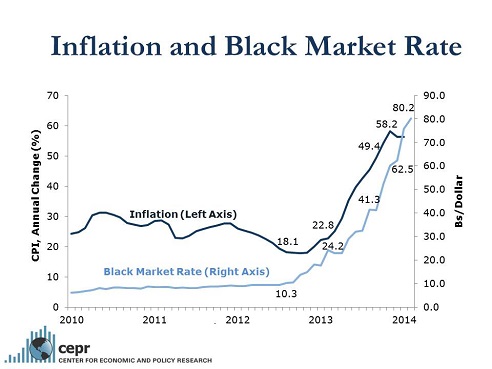