In mid-October, the International Monetary Fund (IMF) and the World Bank Group held their Annual Meetings in Washington, DC. In events throughout the week, the Fund and the Bank stressed the importance of globalization, emphasizing “Its long-acknowledged benefits to economic growth, poverty reduction, and consumers’ access to varied goods at lower prices.” Missing from the schedule was a broader discussion of the IMF’s role in globalization, and the effects of its policies on developing countries.

On October 9, the Center for Economic and Policy Research hosted a panel in which the renowned economist Jeffrey Sachs, CEPR Co-Director Mark Weisbrot, and Nancy Alexander of the Heinrich-Böll-Stiftung provided their perspectives on both the Fund’s policies and global trends in development. The event centered on the release of CEPR’s “Scorecard on Development 1960-2016: China and the Global Economic Rebound,” the fourth report in a series examining global macroeconomic trends over the past 50 years. Previous “Scorecard” reports found a dramatic slowdown in economic growth and social indicators in low- and middle-income countries during the 1980–2000 period when the IMF’s policies were most influential in developing countries. Critically, the latest report found that China was responsible for much of the improvement in economic and social indicators sometimes attributed to the “Washington Consensus” variety of globalization.

Mark Weisbrot, Co-Director of CEPR and author of the book “Failed: What the ‘Experts’ Got Wrong About the Global Economy,” presented the Scorecard report and described how China ? not the neoliberal globalization promoted by mainstream Western commentators ? has been driving global development in recent years, contributing, e.g., to a sharp decrease in extreme poverty worldwide.

Jeffrey Sachs, special advisor to UN Secretary-General António Guterres on the Sustainable Development Goals (SDGs), discussed how, since the 1980s the IMF and multilateral development banks have promoted policies undermining development. He discussed the need to reshape the policy agendas of these institutions to help developing countries achieve SDGs within the shortest time frame.

Nancy Alexander, program director for economic governance and the G20 at the Heinrich-Böll-Stiftung, noted that the Washington Consensus had made a big comeback with potentially existential consequences for humankind and our planet. She discussed the emergence of a new model of development, supported by all the multilateral development banks ? in which state funding would be used to leverage investment from institutional investors (pension funds, insurance funds, etc.) on a massive scale.

“… This [was] President Obama’s last speech at the United Nations. He said, ‘over the last 25 years the number of people living in extreme poverty in the world fell from 40 percent to 10 percent.’ … This is true according to the World Bank statistics. There is some controversy over this, but nonetheless just accepting that … two-thirds of this poverty reduction was in China. And if you go back a little further from 1981 to 2010 … 94 percent of the net [extreme] poverty reduction in the world was in China. 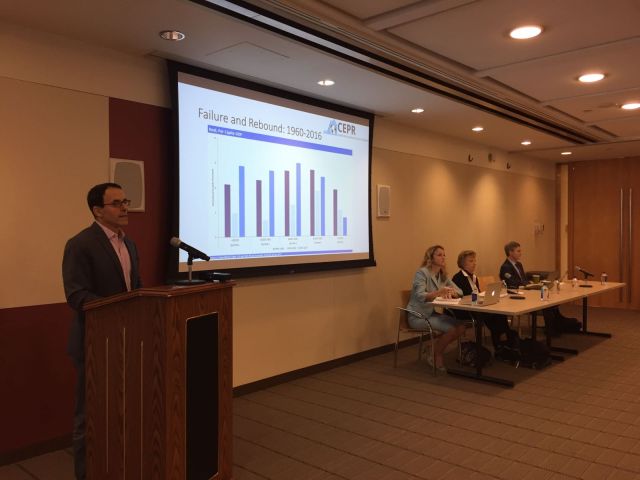 “Chinese globalization has done very well, and income per capita in China since 1980 multiplied 21 times. That’s the fastest economic growth in world history by far, but it was based on very different economic policies than the globalization that President Obama and a lot of the people who write for the media, and … academics as well, are talking about.

“I’m just summarizing here some of the differences between the neoliberal globalization that was promoted from here in Washington and the international institutions of global governance. You had more indiscriminate open international trade and capital flows. Central bank independence was a major principle that was increased wherever it could be done politically, and … the industrial and development policies of the 1960 to ‘80 period were abandoned. Tighter fiscal and monetary policies [were] often pro-cyclical, and you had inflation targeting from the central banks. A lot of deregulation, especially financial, and increasing protectionism in the area of intellectual property, which was another founding principle of the World Trade Organization.

“[In] conclusion, first of all, many who praise the globalization of the last 25 years or more are really praising Chinese economic policy without recognizing it, and the public doesn’t recognize it. So that’s kind of important. Not to say that the Chinese model is going to be directly applicable, because they were transitioning from a completely state-planned economy to a mixed economy, but nonetheless there is probably a lot that can be learned about development policy from the most economically successful policy in history.

“In some measure, we’re not out of the Reagan era yet because Reagan brought in the idea of corporate rule and tax cuts for the wealthy as the dominant strategies for the economy. Bashing trade unions and raising inequality of income and the tax fight that we are in in the United States these days is exactly a continuation of that strategy. So, Reagan really changed the political order, and it hasn’t changed back yet, and that’s true with democratic administrations as well, which have been unfortunately kind of soft versions of what has been fairly constant since the early 1980s. 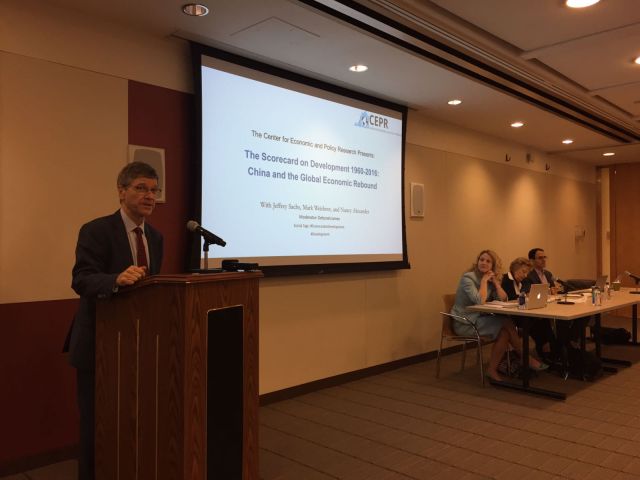 “… It’s important to add in one factor that hasn’t been mentioned yet … the developing debt crisis which came in 1982 in full form. … The Reagan ideology, combined with the debt crisis, led to a pretty brutal crackdown on developing countries and their public investments and their social services during that period, because the IMF’s strategy was to force primary budget surpluses high enough so that these debts could be repaid. And I saw that first hand in Bolivia where I was helping a government to fight hyperinflation. And as soon as the hyperinflation ha[d] stabilized in a very fragile way, the IMF demanded that Bolivia start repaying unpayable debts.

“… It was rarely about economic development. It was about foreign policy. And it was about American power. And the institutions reflected that.

“My belief in goal-based development is very much amplified, and I believe supported by this historical experience of the last 17 years. First, the Millennium Development Goals. Second, the kind of goals in China’s five-year plans. OK, that’s a Chinese institution, but God forbid that America should plan a little bit. It doesn’t have to be the morning tweet and the afternoon counter-tweet and the evening tweet. Is that the limit of our thinking? Really, it’s a serious problem that we have no institutions that look ahead right now in this country.

“And the World Bank also needs a different kind of strategy from saying, ‘Well we have a certain amount of money to allocate to this country. What are you going to do with it?’ Because that’s maybe how a bank would behave, but it shouldn’t be a bank, it should be a development institution, and it should say, ‘OK, we need to support countries to achieve the Sustainable Development Goals. How should our lending capacity be devoted to success of these Sustainable Development Goals?”

“… My thesis today may not sound cheerful but I hope that it holds your attention. Namely, that the Washington Consensus of the ‘80s and ‘90s ? and arguably it’s continued ? is coming back with new force. New force in an age of oligarchy, an age of skyrocketing inequality, an age of global warming, where we may not meet targets to control the temperature of the earth and make it livable for all species. 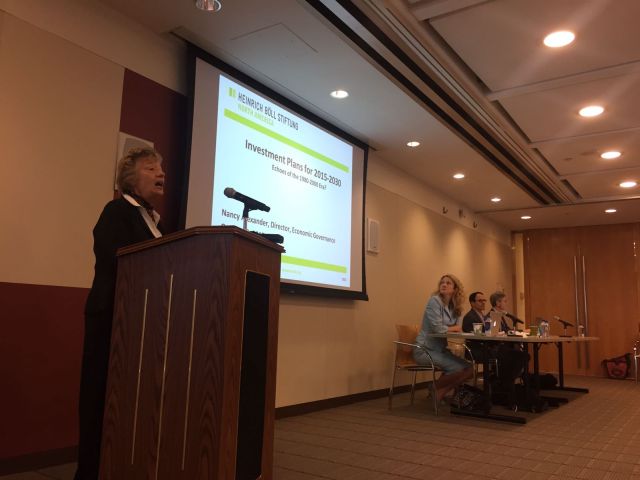 “… The intention of all the multilateral development banks and the bilateral governments is to use public money to leverage institutional investors. Now, who are they? Institutional investors have global savings of over 100 trillion dollars. And they are the pot of gold. And, one of the largest categories of institutional investment are pension funds, as well as insurance funds, and these are experiencing incredible, staggering gaps in their obligations to elderly people, insured people. They could go insolvent unless they can find higher yields. So, the crux of this ‘Billions to Trillions’ model is using enough public money, which means taxpayer dollars, user fees, aid to leverage, public-private partnerships, private participation in delivering public services. And to bundle the public-private partnerships in portfolios from trading.

“I [want to] emphasize how the ‘80s are coming back, because in the ‘80s, the only way all those debts could be repaid was to compress public investment and so, they were eliminating subsidies. They were cutting wages. They were cutting the wage bill caps. That increases valued-added taxes, regressive taxes, making very narrow targets for benefits, which the IMF is doing now, privatizing pension and health care systems.

“So, we are working with a team with the Office of the High Commissioner on Human Rights on the ways that mega projects affect human rights, land grabbing, and displacement of people, resource extraction, because the purpose of these trade facilitation projects is to build access to resources and markets. … According to the president of Transparency International, as much as 40 percent of a mega project can go to corruption.”

Free Trade and Free Taxes: How Our Intellectuals Help the Rich