The International Monetary Fund (IMF) recently released two papers assessing the impact of an aging population on productivity growth, one looks at Europe, the other one at Japan. Their argument is simple: an aging population also means an overall older and less productive workforce.

The IMF’s Japan study supports this finding by showing that prefectures that are aging faster experienced slower economic growth than prefectures with higher population growth. They make the point that the faster aging is to blame for the slower growth; however, this does not take into account that young people tend to move to urban areas where there is  higher productivity growth.

If we compare countries rather than regions,  this link is no longer apparent. Looking at population and productivity growth for a series of OECD countries, there is no obvious connection between these two measures.

Using OECD data we calculated the change in the working-age population and the average productivity growth for Australia, Belgium, Canada, Denmark, Finland, France, Germany, Italy, Japan, Korea, Norway, Sweden, the UK, and the US. 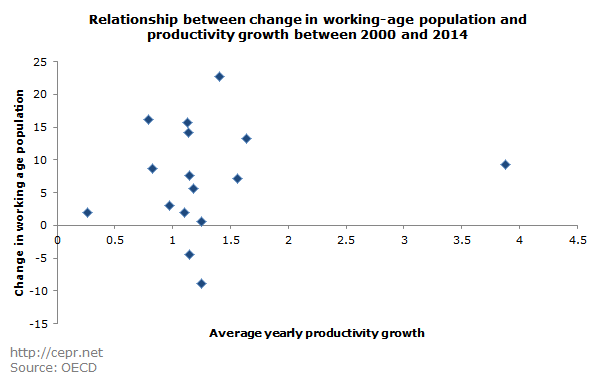 While clearly an aging population and workforce do place certain burdens on society, if it has a negative impact on productivity growth, the effect of aging can clearly be outweighed by other factors.