Ecuadorian Economy Growing, But Media Presenting It as Still in Recession

As Ecuador heads into its presidential and national assembly elections on Sunday, press reports an out-of-date picture of the economy there. These reports routinely refer to the economy as currently in recession, and use out-of-date IMF estimates and projections for next 2016 and 2017.

But the latest available data show that the Ecuadorian economy returned to positive GDP growth in the second quarter of last year. And while we don’t have full data for the fourth quarter, every indication is that it is still growing.

Also, the IMF’s projections for 2017 (negative 2.7 percent) are out of date. They were made some time in the third quarter of last year, for the IMF’s October World Economic Outlook, when third quarter data was not available. The IMF would not make the same projection today. While reporters do not intend to mislead their readers when they cite IMF forecasts, these outdated projections nonetheless present a misleading picture of the current state of the economic recovery and its likely growth next year.

Those who only want to know what is happening to the Ecuadorian economy can stop reading here. But those who are interested in more understanding of how such mistakes are routinely made, keep going.

The main reason for the confusion is that the most commonly used figures for some countries are quarterly year-over-year (YOY) figures. So, for Ecuador, if we compare the third quarter of last year to the third quarter of 2015, we find that real (inflation-adjusted) GDP has declined by 1.6 percent. This is a fine data point if we just want to know what has happened over that year. But if we want to get a better idea of what is happening in the present, or closer to the present ? e.g., is the economy in recovery, or recession? ? then we have to look at quarter-on-quarter growth, for the latest quarters available. And since there are seasonal variations, we need seasonally adjusted quarter-on-quarter growth. (Of course the YOY data does not need to be seasonally adjusted because you are comparing, e.g., Q3 2016 to Q3 2015.)

In our recent paper, one can see the seasonally adjusted quarterly data for real (inflation-adjusted) GDP: 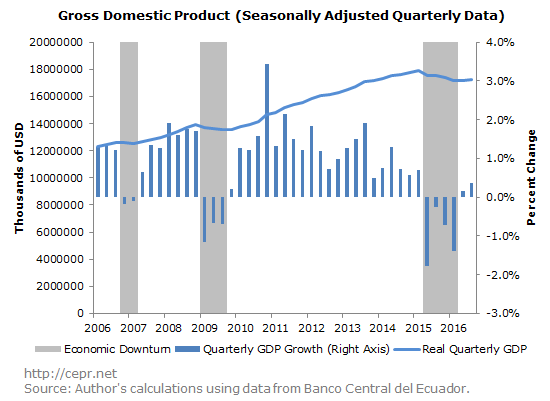 As can be seen, the economy likely returned to growth in the second quarter of 2016, and grew at a 1.7 percent annualized rate in the third quarter. So it is not accurate to describe the Ecuadorian economy as “in recession,” and forecasts of negative growth for 2017 that were made before this data was available are out of date.