How Much Will Trumpcare Insurance Cost People with Health Issues?

One of the main goals of Obamacare was to make insurance affordable for people with health problems. Insurers are happy to insure healthy people. People in good health have few claims, so essentially they are just sending a check to the insurer every month. It’s a good deal if you can get it.

But it’s a very different story if you have serious health issues. For these people, insurers actually have to cough up the money. In the good old days, before the Affordable Care Act (ACA), insurers would either refuse to insure people with serious health conditions altogether (e.g. cancer survivors, heart disease, diabetes) or add large supplements to their premiums.

The ACA prohibited insurers from discriminating against people based on their health condition. They could charge different premiums by age, but they couldn’t turn anyone down because of their health, and they had to charge everyone the same rate. This means that a 60-year-old with three heart attacks would pay the same premium as a 60-year-old who is a serious marathon runner.

Donald Trump has repeatedly said that he wants to get rid of the ACA and is currently pushing a case before the Supreme Court that would end it if he wins. While he says that he wants to preserve protections for people with pre-existing conditions, he has introduced no legislation that would have this effect or even outlined a plan for protecting people with health problems.

For this reason, it is reasonable to ask how much money people should expect to pay for their insurance if they have a health problem and Trump gets his way and eliminates the ACA. The chart below gives some very ballpark numbers. 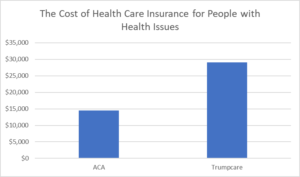 The starting point here is the average unsubsidized premium under Obamacare. The average premium cost for the middle tier silver plan is $1,212 a month currently, or 14,544 a year. This is averaged over all age groups, so people in their 20s and 30s would pay less, while people in their 50s  and 60s would pay more. This also refers to the unsubsidized rate. Moderate income people, and even most middle-income people, are eligible for subsidies under the ACA. (Low-income people are eligible for Medicaid, which was substantially expanded by the ACA. This expansion will be reversed if Trump wins his Supreme Court case.)

The question then is how much people with health problems can expect to pay if the ACA’s protections for people with pre-existing conditions are ended. This requires somewhat of a shot in the dark since part of the answer will depend on state regulations. If state regulations don’t prohibit turning down people, insurers are likely to simply refuse to cover people with serious health problems like heart disease or cancer.  They also would look to charge different rates depending on the specific condition. A former athlete with a bad knee would pay more than a person with no health issues, but a person with multiple sclerosis would likely pay more than a person with a bad knee.

One way to get a sense of the additional premiums is to look at the high-risk pools that many states had before the ACA. These pools allowed people with health conditions to get insured, but typically at a substantial cost relative to people in good health. The pools also were typically subsidized by the state. In a 2010 article James Capretta and Tom Miller report that in some states the premiums in the high-risk pools were more than double the average premium outside the pools. We can use this doubling as a rough guess as to what premiums would be for people with health issues without any sort of subsidy. (The base premium would also be somewhat lower if we would exclude people with health issues from the pool. On the other hand, people with very severe health issues would almost certainly face even higher premiums, in the absence of any subsidy.)

Using the doubling scenario, the average premium would be $2,424 a month or $29,088 a year. As with the ACA premiums, we would expect premiums for people with health issues to be somewhat lower for those in their 20s and 30s and higher for people in their 50s and 60s. And, with no new legislation, there would be no federal subsidies for anyone, once Obamacare was ended.