The IMF’s newly established Resilience and Sustainability Trust sets the reserve asset status standard for SDR investments and creates a roadmap for regional development banks to onlend rich countries’ SDRs to developing countries in need of financing for sustainable development, and climate financing.

The IMF has published the details of the Resilience and Sustainability Trust (RST) that the IMF Executive Board approved during its 2022 Spring Meetings.

The idea for the RST was endorsed by the G20 last fall, with the IMF managing director and staff taking quick action to set up and obtain Executive Board approval for this new instrument.

The Fund has repeatedly mentioned three avenues for rechannelling the SDRs issued in August 2021: existing IMF trusts such as the Poverty Reduction and Growth Trust (PRGT) and the Catastrophe Containment and Relief Trust (CCRT), the newly-created RST, and multilateral development banks (MDBs). While the Fund has focused on these three, there are more options for re-channeling SDRs including bilateral donations, donations for debt relief or the newly-created administered account for Ukraine.

Among those committed to making SDRs a key resource for development finance, the MDB option is seen as the best path to fulfill this vision. Development experts have been proposing a “development link” for SDRs since the mid-1960s.

Why MDBs? Because they have previously opened “prescribed-holder” SDR accounts at the IMF. Because they also have de jure and de facto preferred creditor status in most of the world, which usually translates into very high credit ratings. And because MDBs — and especially regional development banks  — are more closely aligned with the development needs, and climate investment needs, of developing countries, and are better suited to support the type of project-based financing that is needed. In contrast, IMF loans are focused on responding to macroeconomic and balance of payments needs.

Wealthy countries and China received two-thirds of all the newly created SDRs. But they don’t need them as they have their own mechanisms to finance government spending, have adequate reserve cushions, have reserve-issuing status, and/or have access to dollars via the US Federal Reserve.

France was behind a proposal to relend rich countries’ SDRs to Africa, principally via the African Development Bank (AfDB). The AfDB came up with an innovative proposal that considers SDR deposits from rich countries in the AfDB to be a hybrid instrument. From the perspective of the AfDB, these would be capital, or quasi-capital, injections that would allow for leverage and increased lending to developing countries. From the perspective of rich countries, they would remain as reserve assets. This assessment was supported by French investment bank Lazard.

On February 18, 2022, IMF Managing Director Kristalina Georgieva gave a speech at the EU-Africa Summit, arguing that SDRs could not be deposited at MDBs because if so, they would lose their reserve asset status. A few days later, this statement was accompanied by a footnote that said that this assertion only applied to EU member countries. In a panel event with civil society organizations on April 18, 2022, the IMF reiterated the MDB rechannelling option.

In her speech in February, Georgieva had declared that only the IMF could guarantee reserve asset status for SDR investments. According to the IMF MD:

the reason our members cannot channel SDRs directly to the regional development banks is because we have to protect the reserve quality of this asset called “Special Drawing Rights.” And clearly, the responsibility to guarantee this reserve asset quality rests on the shoulders of the IMF. It is vitally important for our members who are willing to provide the SDRs that we do this in legal compliance with the Fund’s regulations.

The implied argument was that because the IMF is the issuer of SDRs, only the IMF can guarantee SDRs’ immediate liquidity. But this entails an erroneous understanding of the IMF’s Articles of Agreement and the IMF’s balance sheets.

The issuer of SDRs is not the IMF General Department (which is the department in charge of loans and all regular operations). The issuer of SDRs is the Special Drawing Rights Department (SDRD), created in 1969. The SDRD has its own accounting and its own balance sheet, and is legally separate from the General Department. The SDRD is the only entity that can create SDRs, but it cannot lend them; it can only allocate them to countries.

From a banking perspective, the IMF General Department is a customer of the SDRD. The IMF itself has an account at the SDRD: it is part of the General Resources Account. When SDRs are issued, none are allocated to the IMF. The IMF receives SDRs from countries when they pay their quota subscriptions with SDRs, or when they repay loans with SDRs. The SDRs held in the IMF’s trusts are pooled in the IMF’s General Resources Account.

So what does all this have to do with the RST and financing for development? The new RST legal documents state that the way the RST guarantees that SDR contributions will maintain their “reserve asset status” is not simply by virtue of the fact that they are contributed to a trust at the IMF, but by including an “encashment requirement” composed of a tranche of the Trust’s loan account plus its deposit and reserve accounts. 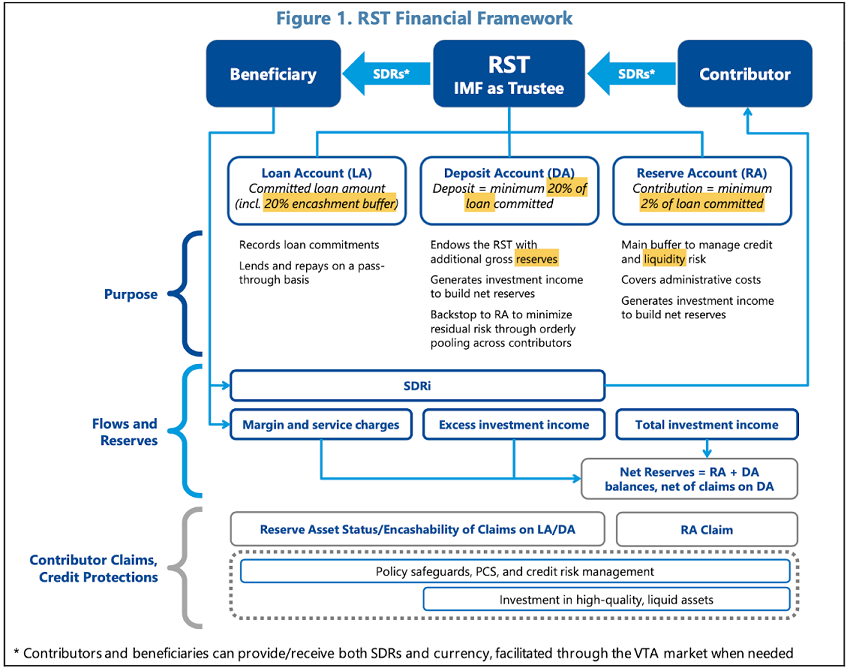 The effective lending of the RSST will thus mobilize 65.6 percent of the contributions to the Trust while 34.4 percent of these will remain liquid. This means that, for every dollar that the RST effectively lends, 52 cents must be left untouched at the RST. This encashment requirement will serve as a buffer if rich countries decide to withdraw their SDR contributions without advanced notice. The IMF considers the size of the encashment buffer (one-third of the total fund) to be enough to guarantee liquidity (reserve asset status) of the SDR contributions.

Similarly, top-rated regional development banks like the AfDB can easily open a line for receiving SDR reserve asset status contributions from rich countries as long as they can guarantee that at least one-third of the SDRs remain untouched and are not lent. The rest of the financial specifications, such as maximum grace period, maximum term, and interest rate structure can also be copied from the RST.

There will be one difference between the RST and the development banks: the lack of macroeconomic conditionality (which the IMF calls “strong policy safeguards”). Given the fraught history of IMF conditionality in lending, this is a positive.

And fortunately, nobody can seriously claim that conditionality attached to RST lending (basically having an ongoing upper-tranche credit program with the IMF), is what makes SDRs contributed in the RST fulfill the reserve asset status.

The IMF, in its April 2022 policy paper on the RST, noted that: “Global financing needs for climate change alone are estimated in the range of $3–4 trillion on an annual basis, dwarfing the $500-600 billion of climate finance mobilized annually from MDBs, climate funds, and markets.”

This is why the world needs a new 2 trillion SDR allocation, but also a large-scale maturity transformation of SDRs from reserve asset status to climate and development investments.

The IMF should not lock out regional development banks from making use of SDRs by erroneously claiming that only it can guarantee rechannelled SDRs’ reserve-asset status. With the design of the RST, the IMF has set a standard for SDR liquidity. Let that standard be applied to development institutions anywhere, and let the development link — and climate financing — for SDRs finally see the light of day.