No, Ecuador Is Not Heading into Its Second Year of Recession

In an article about Ecuador’s presidential transition that appeared in Bloomberg View, Mac Margolis claims that “Moreno takes over as Ecuador heads into its second year of recession.” However, this is not true.

Looking at quarterly GDP data for Ecuador, we see a different picture. 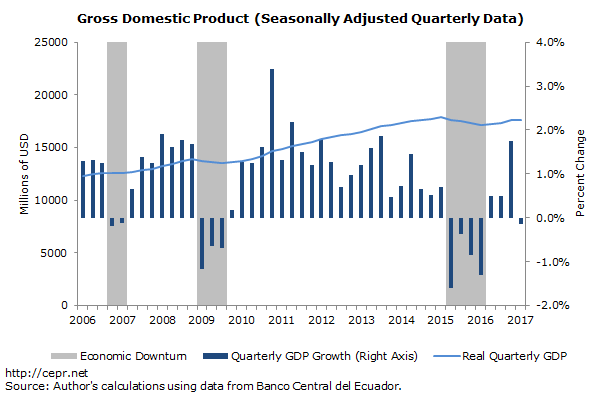 Bloomberg’s reporting on Greece, for example, uses the standard procedures and definitions of the economics profession, including quarterly (seasonally adjusted) data and an accepted definition of recession. The standards of reporting for Ecuador should not be any different.

While it is unfortunate that the positive growth posted by Ecuadorian GDP in the last three quarters of 2016 did not extend to the first quarter of 2017, presenting Ecuador’s economy as being in a two-year recession is simply wrong.