The ACA and Workers’ Freedom

In March of 2014, nothing seemed to be going right for the Affordable Care Act (ACA). Members of the press were maligning the problems with the Healthcare.gov website, which had actually been fixed months beforehand. Enrollment on the ACA’s health insurance exchanges was far below projections. And perhaps worst yet, the ACA’s critics were claiming that the law would incentivize firms to cut workers’ hours and create a surge in part-time employment.

Discussion about the problems with the website subsided over time. And the claims about low enrollment figures were shot down in April, when it came to light that enrollment had surged during the previous month. It’s time that we shelved the critique about part-time work as well.

However, there is one positive way that the ACA could result in greater part-time employment. Specifically, there’s good reason to think the ACA could be leading to greater voluntary part-time employment. To explain: if an employee is working part-time and would like to work full-time, his or her status as part-time is a negative; that employee would like to work more, but hasn’t been given the opportunity to do so. However, if an employee is voluntarily working part-time, it means that he or she is making an active decision to pursue part-time employment. Since health insurance was linked to a worker’s status as a full-time employee before the ACA went into effect, many Americans worked full-time simply to receive health insurance benefits; this was true even for workers who otherwise would have preferred to work part-time. Thanks to the ACA, workers no longer have to work full-time in order to receive insurance, meaning they can work fewer hours if they want to, assuming they can still pay the bills.

April is a useful benchmark because of the enrollment surge that occurred in March 2014. The number of people who signed up for insurance on the ACA’s federal exchange in March was greater than the number who signed up during the previous five months combined; on the state-run exchanges, 59 percent as many people signed up for insurance in March as signed up between October and February. With the April 2015 jobs figures now available, we can see how part-time employment has changed between the first four months of 2014 and the first four months of 2015. The graph shows the year-over-year changes in both voluntary and involuntary part-time employment since the recovery began in 2009 in the bar graph below: 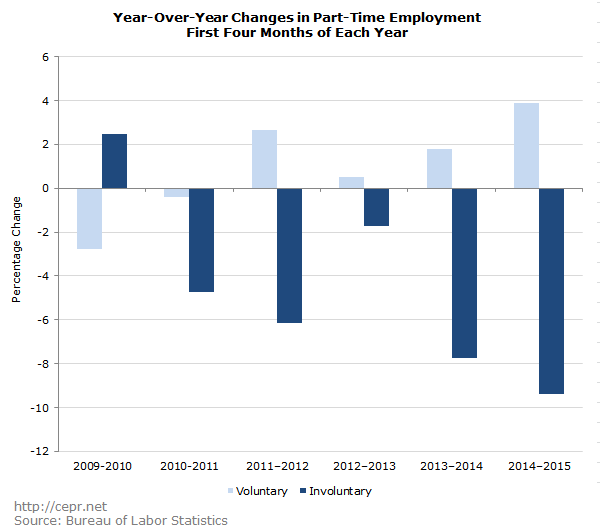 It’s clear at this point that the predicted spike in involuntary part-time employment never happened. What happened instead was that many workers who no longer needed to get insurance through employment responded by working part-time rather than full-time. In other words, the ACA has enhanced workers’ freedom in the labor market.

A May Day Assessment of Union Membership in the United States