The Impact of the Pandemic on Superstar Cities

The Washington Post had a piece last week discussing the extent to which the pandemic, and more specifically increased opportunities for remote work, will affect thriving cities like New York and San Francisco. The main conclusion of the piece is that it won’t have much impact.

This view is a bit peculiar. The argument in the article is essentially that these cities are very attractive places to live, and that will continue to be the case even if people have more opportunities to work remotely.

However, that is not really the question. This is not a zero/one proposition. People will still want to live in places like Seattle, San Francisco, and New York even if everyone could work remotely. But that is beside the point. The issue is whether fewer people will want to live in these cities if they had the option to keep their jobs and work somewhere with much lower housing costs.

It is far too early to answer this question conclusively, but there is plenty of anecdotal evidence from realtors and other actors in the housing market that people are leaving high-priced cities and moving to lower-cost locations. This pattern is also visible in the Case-Shiller House Price Index for several major cities.

The graph below shows the increase in the Case-Shiller Index from February of 2019 to February of 2020 for several major cities and for the country as a whole. It also shows the annualized growth rate reported from March to August. 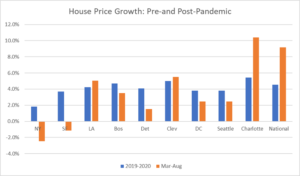 As can be seen, the rate of increase in the index slowed sharply for several cities, most notably New York. The index had increased by 1.8 in the year from February 2019 to February of 2020, but then declined at a 2.5 percent annual rate from March to August. It is worth noting that this index is for the whole New York metro area. This means that the decline in prices for the city itself could be much larger if it was offset by rapid price rises in distant suburbs.

There is a similar story for San Francisco where prices had risen by 3.7 percent in the year preceding February of 2020, but have declined at a 1.1 percent annual rate since March. Other cities covered in the index do not show this sort of sharp reversal, but most do not share in the sharp appreciation in house prices shown in the national index.

The national index shows a sharp uptick in house price growth. Prices rose by 4.5 percent in the year prior to February 2020. Since March they have risen at a 9.2 percent annual rate. This reflects a buying boom that has come in the wake of the pandemic and also a sharp drop in mortgage interest rates. The implication is that people are finding areas other than the superstar cities to be relatively more attractive in the pandemic era.

The one notable exception among the cities in the Case-Shiller index (there are 20) is Charlotte, North Carolina. Prices in Charlotte rose 5.4 percent in the year to February 2020. Since March they have risen at a 10.4 percent annual rate. This acceleration fits the story of people leaving expensive densely populated cities like New York and looking for less-crowded and less expensive cities.

It is still too early to make any definitive judgments, but as remote work becomes more accepted, it is hard to believe that many people will not take the opportunity to move to lower-cost parts of the country. This doesn’t mean New York and San Francisco will become ghost towns, but it will mean that prices of real estate there may fall a great deal.

This is largely a good story in my view (more affordable housing is generally good), but it does mean that many jobs in businesses serving the city’s office workers may never come back. That can be an opportunity for creating new jobs doing important tasks, like child care and elder care, and installing solar panels and retrofitting buildings to be more energy-efficient. Of course, that will require government resources to carry through this restructuring, but if we make the commitment, we will end up in a much better place.