The U.S. is a notable outlier in the chart, with the federal minimum wage of $7.25 an hour much lower than the trend would predict for a country as rich as the U.S. Indeed, many U.S. states have higher minimum wages, and the chart shows that these wages, while higher, follow a slower upward trend.

But the data and the graph can be improved in a few ways. First, it’s important to use PPP for the minimum wages of these countries, not the exchange-rate values that it seems the Economist used. This is because a dollar can buy a varying amount of goods or services depending on place. PPP adjusts the minimum wages so that they are comparable.

Secondly, using GDP in PPP per hour worked instead of per capita adjusts for the different amount of hours people work. For example, if a country were very productive but had a culture where the average worker only worked 20 hours per week, it would fall artificially low on the Economist’s GDP per capita scale.

Lastly, using a single data source and year—OECD data for the country-level data for 2014—and including all available countries is good practice. Including more countries provides a more accurate trend line, for example.

The graph, below, incorporates these changes and also makes some useful comparisons. (Click for interactive version.) If the U.S. followed the international trend, the federal minimum wage would be $10.51 instead of $7.25. For states, the minimum wages would range from $7.83 (Mississippi) to $14.71 (Alaska), based on Gross State Product per hour. 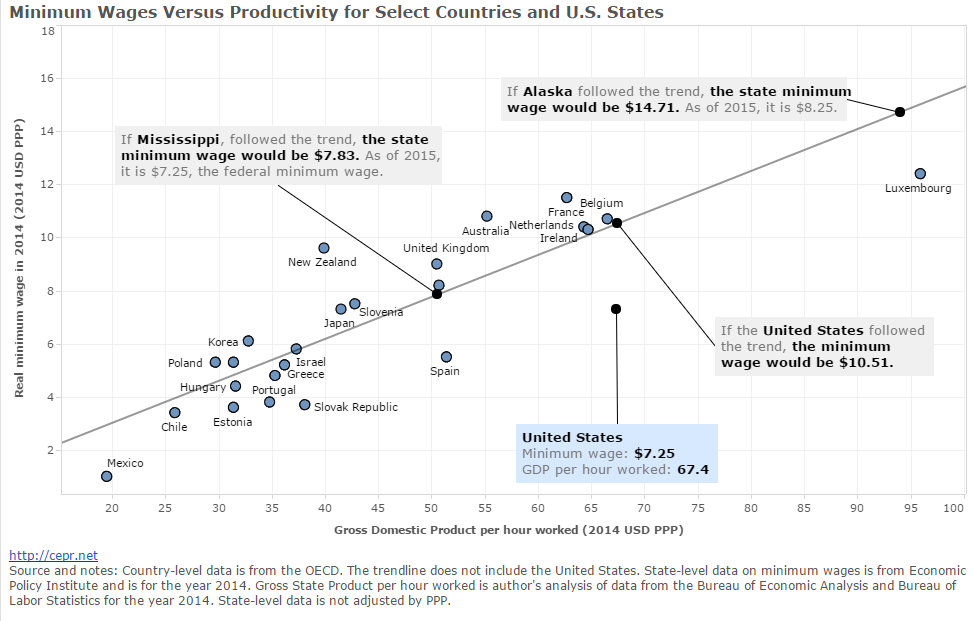 An important note on this data is that some rich countries do not have broad minimum wages and thus are excluded from this analysis. Austria, Denmark, Finland, Germany, Iceland, Italy, Norway, Sweden, and Switzerland have a GDP per hour worked that ranges from $48 to $88, and none have a minimum wage like that in the U.S. These countries often have wages that are set by negotiations between labor organizations and the government or employers. The results are de facto minimum wages that are quite high. Denmark, for example, has a minimum wage of about $18 an hour. This could imply that, with data that approximates these de facto minimum wages, the international trend line would rise more sharply as countries get richer and more productive. This would mean the U.S. would be even farther behind its peers.

In addition, social policies like the minimum wage have varying levels of importance in the countries where they are set. In the U.S., where there is not a generous social safety net, it is likely to be more important. In countries where there are social policies that provide a greater degree of economic security, the level of the minimum wage might be less important. Thus, for the U.S. it is not unreasonable to think the minimum wage might need to be even higher than the international trend to provide workers with a comparable level of economic security, especially in places with high costs of living.

But by any analysis, it’s clear that the federal minimum wage—and the minimum wages for many states—are far below the levels that other rich countries provide, based on income and productivity.

The Impediment to Productivity Growth: Waste that Makes Some People Rich