The deadline for Greece’s bond swap, the so-called PSI (Private Sector Involvement), is approaching tonight (10 p.m. Greek time).  As part of Greece’s latest bailout agreement with the European Central Bank, European Commission, and the IMF (the so-called Troika), Greece needs to achieve the near universal participation of private bondholders in a debt-restructuring plan to lower the face-value and interest rates on 206 billion euros of privately-held bonds.

Under the terms of the bailout program Greece must reduce its debt to 121 percent of GDP by the year 2020, a level the Troika considers sustainable, and the upcoming bond deal is essential to reaching this target.  Under the official terms Greece has offered private bondholders, old bonds would be exchanged for new bonds with a face value of 46.5 percent of the original.  The new bonds would make annual coupon payments of 2 percent between 2012-15, 3 percent for 2016-20, 3.65 percent in 2021, and 4.3 in 2022-42.

As reported today by Bloomberg, bondholders representing around 60 percent of all outstanding privately-held bonds have announced they will participate in the swap.  It remains to be seen how many more will accept the deal before the official deadline tonight but even if voluntary participation remains low Greece recently inserted collective action clauses into bonds that were issued under Greek law.  These stipulate that so-called holdouts, bondholders who refuse to accept the deal, can be forced to accept the terms of the swap if a large enough number of bondholders (usually a super majority) vote to participate.

Nevertheless, as the debt sustainability analysis (DSA) shown below suggests, even modest shortcomings in the PSI have the potential to derail the Troika bailout program and lead Greece to miss its 2020 debt target.  The figure below uses the last official baseline assumptions from the IMF DSA (contained in the 5th Review of the Stand-By Arrangement) as well as the latest official Greek GDP growth figures for 2011.  It shows the effect on Greece’s projected debt to GDP ratio of different levels of participation in the PSI and compares them to the last official IMF baseline projection.

As can be seen below, even if as high as 90 percent of all private bonds are included in the PSI, Greece would still miss its 2020 target by 7 percent of GDP.  Similarly, an 80 percent participation rate, holding all other assumptions constant, would result in a debt stock of 135 percent of GDP by 2020, missing the Troika target by a large 15 percent of GDP. 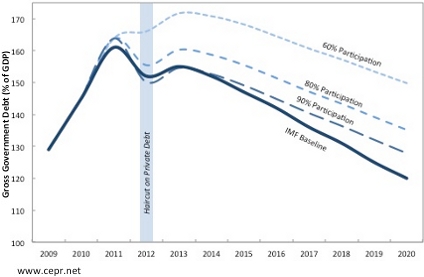 Greece could still in theory meet the program targets by 2020 without near universal participation in the bond swap, but any shortcomings in the PSI mean that Greece would have to undertake even more painful spending cuts to make up the lost ground or simply have to default.  And as CEPR co-director Mark Weisbrot and I have argued, further austerity measures would be largely self-defeating, pushing Greece deeper into depression and making it even harder to achieve its fiscal targets.

For more information on Greece and a detailed analysis of the social and economic effects of the Troika program, see CEPR’s recent paper “More Pain, No Gain for Greece?  Is the Euro Worth the Costs of Pro-Cyclical Fiscal Policy and Internal Devaluation?”