Last week the Wall Street Journal had a front page article on the net worth of Argentina’s first family since 2003, the year Néstor Kirchner was elected president. Based on financial disclosures with Argentina’s Anti-Corruption Office, the Wall Street Journal reported that, “the couple’s net worth rose from $2.5 million to $17.7 million” between 2003 and 2010. Implying that such returns must involve some sort of corruption, the Journal writes, a “lot of people in Argentina want to know where that money came from.”

But there is a serious problem with the way the data are presented here. The Journal is reporting the Kirchners’ net worth in dollars, without adjusting for local inflation. This makes the increase look much bigger than it is, since Argentina had cumulative inflation of nearly 200 percent during these years, according to private estimates. 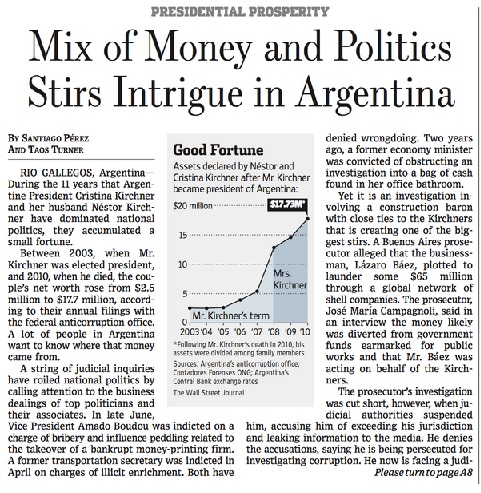 Simply adjusting for inflation takes away more than three-quarters of the Kirchners’ gain. Should the Journal have known this and adjusted for inflation? The question answers itself. We won’t speculate about anyone’s motives.

But inflation is not the only thing to take into account. The Argentine economy also grew very fast during this period, and was coming out of a depression in which asset prices were severely depressed. So when readers see this kind of an increase in nominal dollars, they are also not thinking about how much nominal asset prices in general increased in the Argentine economy during this time. A fair comparison for the increase in the Kirchners’ wealth would be to ask, how did they do as compared to someone who just put their money in the Argentine stock market in 2003 and left it there during these years?

In nominal pesos, using the Wall Street Journal analysis, the Kirchners’ net worth increased from 7.4 million pesos to nearly 70 million pesos between 2003 and 2010, an average annual increase of 37.7 percent in nominal (not inflation-adjusted) terms. The Argentine stock market, known as the Merval, increased at an average annual rate of 31.1 percent – in nominal terms — between 2003 and 2010. So, the Kirchners beat the market, but not by all that much. Where is the news here?

The importance of this kind of misrepresentation should not be underestimated. Many people will see the numbers at the top of the page, and in the graph accompanying the article, and assume that the Kirchners must have done something illegal in order to accumulate these gains. They will not have the inclination or time to do the research necessary to discover what is wrong with these numbers. The Journal, considered a credible news source, will be used by the opposition media – which is most of the media in Argentina – to accuse the president of corruption. Many people are cynical, and they will believe the accusations.