The election of the conservative candidate to the presidency in Argentina has been cause for celebration in mainstream Washington, as typified by this Washington Post editorial. I won’t claim to know which candidate offered the better path for the country going forward, but we should not let the Washington Post types rewrite the past.

The governments led by the Kirchners have much to show for their twelve years in power. Nestor Kirchner took power in May of 2003, just as Argentina was beginning its recovery from its dramatic default and devaluation at the end of 2001. The I.M.F. was insisting that Argentina return to the austerity path that had led to a horrible recession in the years from 1998 to 2001. Its per capita income had already declined by more than 15 percent at the point of the default making the downturn more than four times as severe as the 2007–2009 recession in the United States. Kirchner said no deal.

Instead he pursued policies to promote growth and employment, with an emphasis on helping those at the bottom end of the income distribution. To the great consternation of the folks at the I.M.F. (where Argentina became known as the “A-word”), his policies largely succeeded. While the I.M.F. kept predicting economic collapse, Argentina’s economy grew rapidly. By the middle of 2003 it had already made up all the ground lost following the default and by the end of 2004 its per capita income was above the pre-recession level. And, it was much more evenly distributed.

Eventually the economy did run into problems. Some of these were easily predictable. In the first years following the default the government deliberately pursued a policy of keeping an under-valued currency. The idea was that a trade surplus would help to boost growth. Also, in a country that lacked access to international credit markets due to the default, it is difficult to sustain a trade deficit.

In more recent years the country maintained an over-valued exchange rate. This not only slowed growth, it is a recipe for corruption, as those who have access to foreign exchange at the official price rather than the market price can make large fortunes by turning to the black market.

The government also began issuing phony numbers for inflation and other economic statistics. This is never a good strategy. First, people will recognize the numbers are phony and assume the worst about the state of the economy. In fact, they are likely to assume the situation is worse than what the true numbers will show. Second, democratic governments have to gain the support of their people based on reality, not invented stories.

Anyhow, in spite of these very real problems in the later years of the Kirchners’ presidencies, it is likely that most Argentines are way ahead of where they would be if the country had a government that followed the I.M.F.’s recipes from 2002 forward. Here is the growth record of Argentina and Mexico, the darling of the Washington elite. 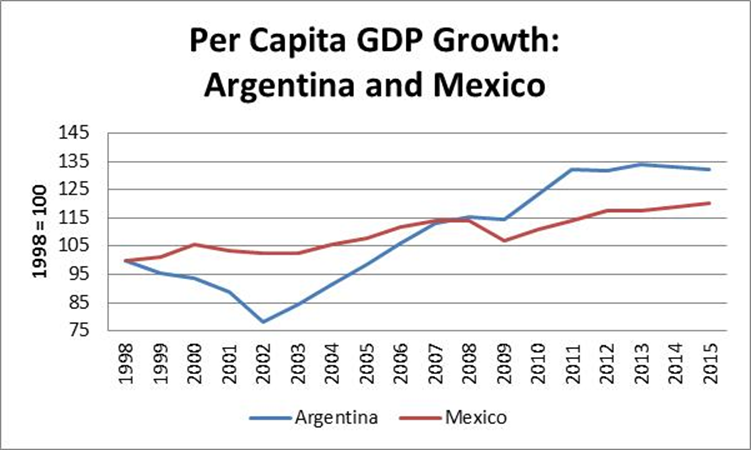 I have chosen 1998 as a base year to make the case tougher for the Kirchners. This effectively gives them zero credit until the economy remade the ground lost since the recession that began long before they took office. Even by this standard, per capita GDP under the Kirchners grew by 10 percentage points more than it did in Mexico over the same period. While some of this gain may be attributable to bad data, it is unlikely that the correct data will reverse the basic story. Outlaw Argentina had more growth than Washington wunderkind Mexico. And it achieved this growth while cutoff from international credit markets.

We will see how the new government fares, but in the past, Argentines seem to have done well by rejecting the advice coming from the Washington Post and its friends.

I was writing quickly and therefore just grabbed the GDP growth number as a summary statistic. The Kirchner governments were ostensibly committed to reducing inequality and improving the plight of the poor, so I assumed that folks knew the numbers on distribution looked good. Here are a few items from the World Bank: the GINI index, enrollment in secondary and tertiary school, and percentage of child deaths. None of these make Argentina look like a basket case.