Holy Lack of Inflation Adjustments: Story of Europe is Much Worse than NYT Tells You

Okay, it’s Memorial Day weekend and maybe the regular crew is on vacation at the NYT, but come on, you don’t print GDP growth numbers without adjusting for inflation. The NYT committed this cardinal sin in a column by Simon Tilford telling readers that the United Kingdom actually has a pretty mediocre economy that is likely to perform even worse post-Brexit.

While I’m inclined to agree with the basic argument (with the qualification that there may be a dividend from sinking the financial sector), two of the graphs accompanying the piece likely left readers scratching their heads. The first showed per capita GDP growth since 2000 for Germany, France, Italy, Spain, and the UK. The moral was that the UK was not doing much better than France, which is supposed to have a moribund economy according to popular legend. The second showed a similar story with real wages.

The problem is that neither graph is adjusted for inflation. As a result, we see the shocking story that per capita GDP growth for both France and the UK have increased by more than 35 percent since 2000. Germany’s per capita GDP has increased by almost 50 percent.

That would be great news if true, but it’s not. Here’s the real picture. 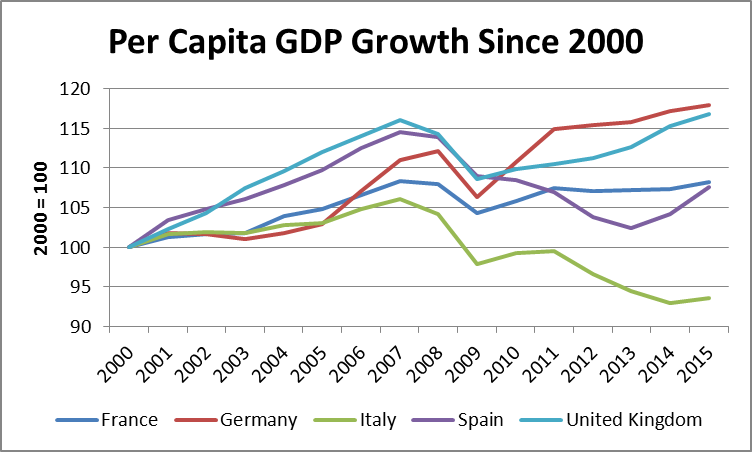 After adjusting for inflation, UK does a bit better relative to France, but 16 percent per capita GDP growth in 15 years is not much to brag about. (I suspect the picture looks less favorable to the UK if we adjust for changes in hours worked.) The story of Italy is especially striking. On a per capita basis, it is almost 7.0 percent poorer than it was at the turn of the century.

Roger Cohen Celebrates the Victory of Austerity in Greece

“Fort Trump” in Poland Is Another Dangerous, Delusional Idea

The Transatlantic Alliance Will Survive Trump