On December 12, 2022, the International Monetary Fund (IMF) will complete its biannual review of the adequacy of its precautionary balances. The last review — which was extraordinary in nature due to some member countries’ concerns around the Fund’s “surcharge” policy — took place in December 2021. Surcharges are additional fees that the IMF charges countries with relatively large and long-term loans; they significantly increase the debt payments that these countries must make to the Fund, siphoning away scarce foreign exchange and budget resources.

The Fund’s net income at financial year-end in April 2022 was positive. In fact, it would have been positive even without surcharges. During the three months ending in July 2022 (the IMF’s most recently published financial statements), the Fund’s net income was positive, thus precautionary balances grew. It would have remained positive even if surcharges had been completely removed. As shown in Figure 1, this has been the tendency over the last decade (except for one year: 2016). 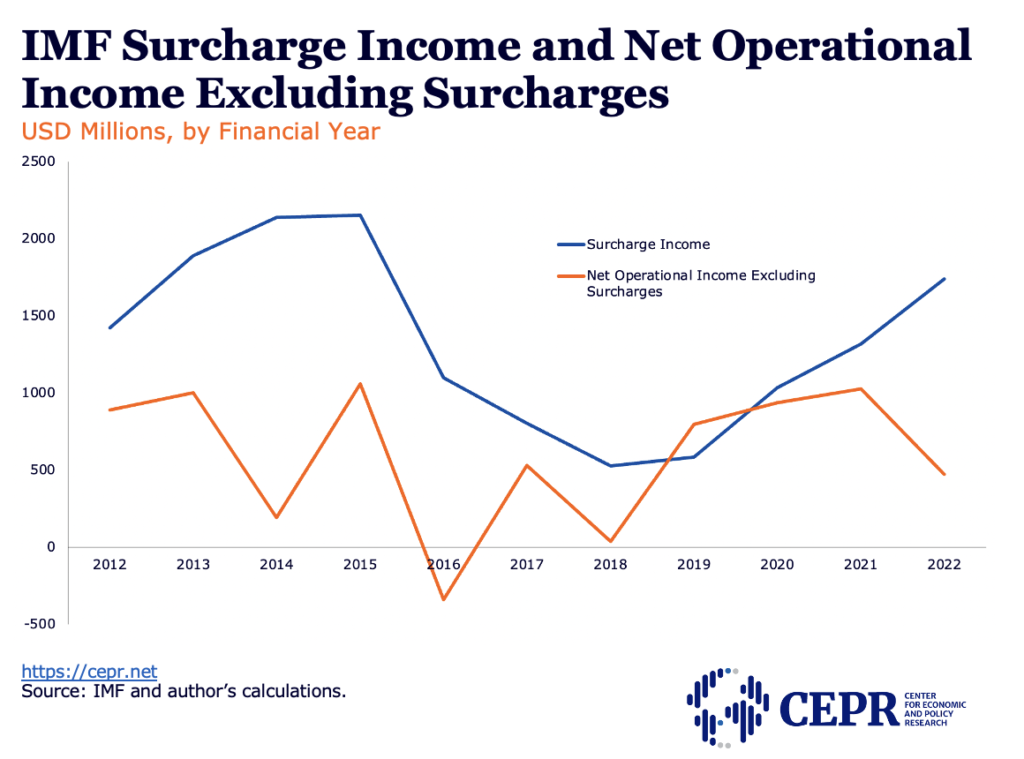 A year ago, the IMF argued that even with surcharges, the rates that large borrowers pay the Fund are lower than hypothetical market rates. Market rates are currently prohibitive for surcharge-paying countries — and are likely to remain so for the foreseeable future — even considering the fact that surcharge-paying borrowers are under heavily monitored IMF programs. It is therefore not reasonable to compare effective IMF borrowing rates with inaccessible market rates.

In the context of rapidly rising interest rates, the IMF’s basic lending rate is increasing and, with it, its regular lending income. Surcharges are an unnecessary burden on debtor countries. The IMF does not publish country-by-country details on surcharge payments, but it is clear that the marginal interest rate of the main surcharge-paying debtors is now over 6.8 percent.

Surcharges are not mentioned anywhere in the IMF’s Articles of Agreement. To the contrary, the founding treaty establishes a unique, de facto senior-creditor-status rate of charge for all debtor countries. For the sake of all parties’ legal certainty, member countries should request that the precautionary balances review also consider this added burden that, according to United Nations human rights officials, threatens national and international prosperity.

The IMF’s precautionary balances are now both safely above the floor and in the midpoint of the indicative target. And balances are growing progressively over time without the need for surcharges, especially given rising interest rates. With the IMF projecting a steady increase in the amount of countries that will pay surcharges, largely as a result of external economic shocks, it is the right moment for surcharges to be safely terminated.