The U.S. and Europe: Different Approaches on Work-Life Balance

The European Union (EU) explicitly forbids an employer to hire workers for a regular workweek of more than 48 hours. There is no equivalent restriction in the United States. While this restriction doesn’t limit hours of workers who hold more than one job or are self-employed, it is indicative of the general attitude on work-life balance in the EU. 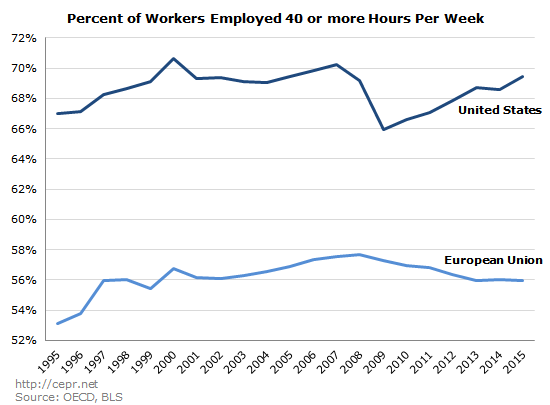 The results of the different approaches taken by the U.S. and the EU are clearly illustrated in the figure above. Overall, a much higher percentage of U.S. employees are working 40 hours a week or more compared to the 28 countries in the EU. It should be noted that the EU includes many lower-income countries, some of which are not even part of the OECD, where lower wages make it more likely that employees will work longer hours. 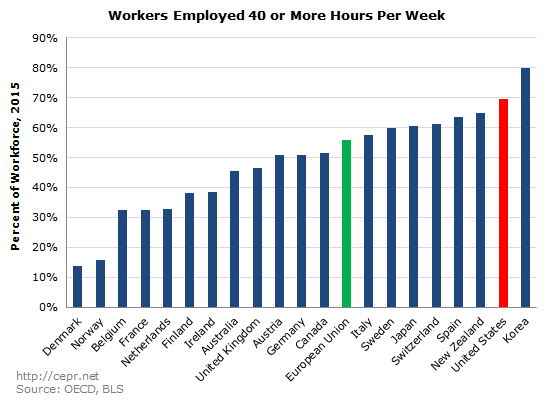 Looking at the other high income countries in the OECD, the only nation in this group that surpasses the United States in the percentage of workers employed 40 or more hours is South Korea, where 80 percent of workers put in 40 or more hours per week. In the United States, almost 70 percent of workers fall into this category, followed by New Zealand, Switzerland, Japan, and Sweden, with roughly 60 percent of their workers. By contrast, less than 15 percent of those employed in Denmark and Belgium have a weekly workweek that crosses the 40-hour threshold. 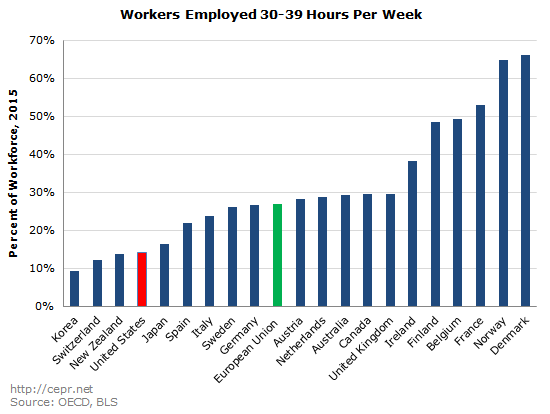 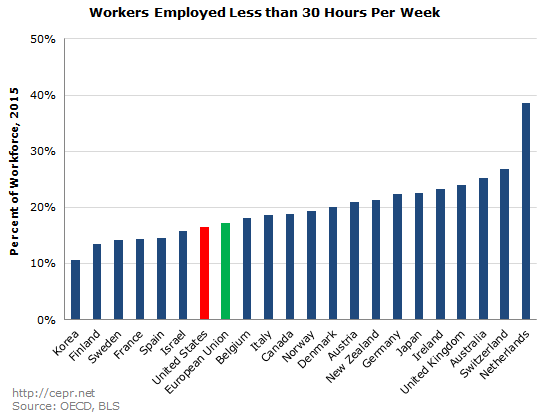 Looking at the number of those employed part-time (less than 30 hours per week), the list is topped by the Netherlands, where one-third of the workforce falls into this category. In Switzerland, Australia, the UK, Ireland, Japan, Germany, and New Zealand, over 20 percent of employees work part-time. By contrast, only about 10 percent of workers in South Korea have a workweek of less than 30 hours. On the whole, the U.S. and the EU are close in terms of the percentage of workers employed less than 30 hours. Of course, as shown by the two previous figures, this is not to say that the U.S. and the EU have similar workweeks.

Again, it is important to note that the EU as a whole also includes a large number of lower-income countries. In higher-income EU countries that have incomes comparable to the United States, part-time work is common. Furthermore, the EU officially encourages part-time arrangements and even passed legislation to ensure that part-time and full-time workers are treated equally in terms of assignments and benefits. A 2010 OECD survey found that part-time work in high-income countries is mostly voluntary, meaning these workers are part-time by choice.

While the U.S. may not currently strike the best work-life balance, it is clearly moving in a positive direction. Although part-time work has declined in recent years, this overall drop masks an important fact: the decline has come purely from reduced involuntary part-time employment. As can be seen in the figure below, this is clearly a cyclical measure; and as the economy has continued recovering from the Great Recession, fewer workers are involuntarily stuck in part-time jobs. 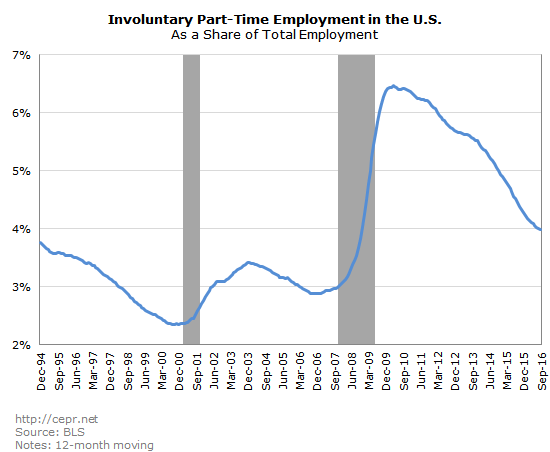 On the other hand, a larger share of workers is now opting for part-time hours. Voluntary part-time work in the U.S. was falling until fairly recently. This uptick in voluntary part-time employment coincides with the implementation of the Affordable Care Act (ACA), which offers workers an alternative to employer-provided health insurance if they choose to work less than full-time. The Congressional Budget Office has estimated (see p. 19) that families’ secondary earners will reduce their working hours far more than primary earners or people not in families; this is consistent with previous CEPR research showing that working parents were more likely to reduce their hours than non-parents, perhaps because they want to spend more time with their children. 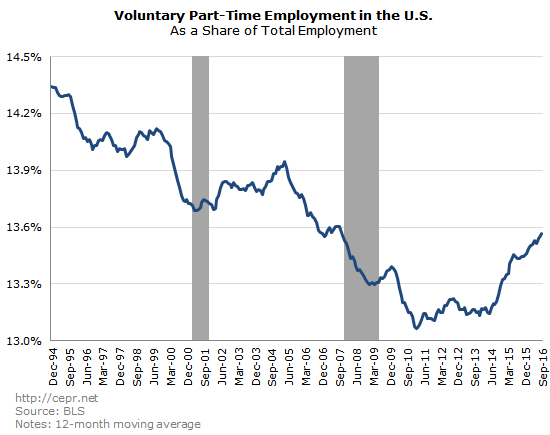 Compared to the EU, the U.S. has a relatively low share of workers employed 30 to 39 hours per week and a high share employed 40 or more hours. However, ever since the ACA went into effect at the beginning of 2014, more workers have been opting for part-time hours. This suggests that as we begin moving towards a more universal healthcare system like many European countries have, our work-life balance could begin looking slightly more like theirs as well.

[1] For the purpose of this post we look at countries where the average yearly wage, adjusted for purchasing power parity, is above $30,000.

[2] According to BLS and Eurostat about 4 percent of workers in the EU, and 5 percent of U.S. workers hold more than one job. In terms of self-employment, 6 percent of American workers fall into that category, compared to 17 percent in the EU.

[3] The BLS data for September 2015 show an obvious error. Annual data for this post have been adjusted accordingly.