Which Pensions Need to Be Reduced, Greek Retirees or I.M.F. Economists?

One of the main issues in the negotiations between Greece and its creditors (the European Commission, the European Central Bank, and the I.M.F.) is the size of Greek pensions. While Greek pensions have already been cut substantially, the creditors are insisting on further reductions.

To assess the appropriateness of this demand a bit of context might be helpful. The figure below compares Greek pensions to those of an I.M.F senior economist. 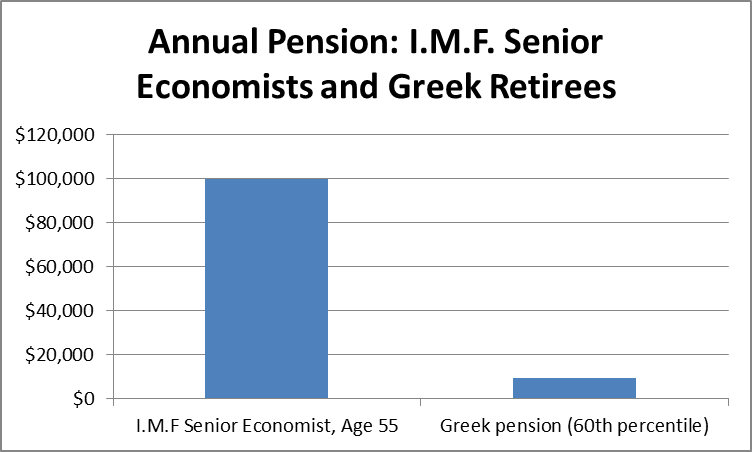 As can be seen, the annual pension of a senior I.M.F. economist retiring at age 55 is more than ten times as much as the pension of the 60th percentile of Greek retirees ($9,500 a year).[1] It should be noted that an I.M.F. economist likely has a Ph.D in economics from a top economics department. While this is true, this background has not necessarily been very helpful to them in performing their jobs in recent years.

The I.M.F. completely missed the credit boom and the downturn that would result from its collapse, as indicated by its projections for Greece from April of 2008. It also grossly underestimated the negative impact of its austerity program on the Greek economy as can be seen from its projections from April of 2011. It appears that the education and skills of the I.M.F.’s economists have not been very useful in their work with Greece.

[1] This calculation takes the 60th percentile number from a recent NYT article on Greek pensions. The pension calculation at age 55 for a senior economist assumes a salary $199,680. While the I.M.F. does not publish the exact schedule for its pensions, it indicates that workers with three years of experience can begin receiving a pension as early as age 50. The assumption is that an economist who started working for the I.M.F. at age 26, and would therefore have 29 years of experience at age 55, would be able to get a pension equal to half of their final salary. (I am happy to be corrected if someone has better information.

Donald Trump and Being Deplorable

As We Wait to Figure Out Who We Elected, New York Times Feeds Us Pablum on Our Social Problems