Greece and the Euro

James Stewart has a piece in the NYT telling readers that if Greece were to leave the euro it would face a disaster. The headline warns readers, “imagine Argentina, but much worse.” The article includes several assertions that are misleading or false.

First, it is difficult to describe the default in Argentina as a disaster. The economy had been plummeting prior to the default, which occurred at the end of the year in 2001. The country’s GDP had actually fallen more before the default than it did after the default. (This is not entirely clear on the graph, since the data is annual. At the point where the default took place in December of 2001, Argentina’s GDP was already well below the year-round average.) While the economy did fall more sharply after the default, it soon rebounded and by the end of 2003 it had regained all the ground lost following the default. 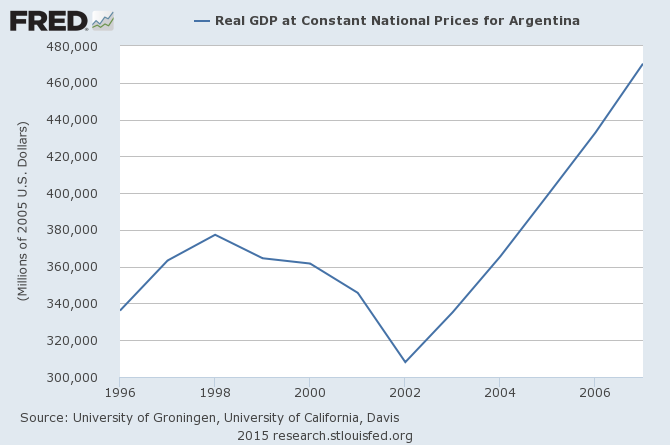 Argentina’s economy continued to grow rapidly for several more years, rising above pre-recession levels in 2004. Given the fuller picture, it is difficult to see the default as an especially disastrous event even if it did lead to several months of uncertainty for the people of Argentina. In this respect, it is worth noting that Paul Volcker is widely praised in policy circles for bringing down the inflation rate. To accomplish this goal he induced a recession that pushed the unemployment rate to almost 11 percent. So the idea that short-term pain might be a price worth paying for a longer term benefit is widely accepted in policy circles.

At one point the piece refers to the views of Yanis Varoufakis, Greece’s finance minister, on the difficulties of leaving the euro. It relies on what it describes as a “recent blogpost.” Actually the post is from 2012.

To support the argument that Greece has little prospect for increasing its exports it quotes Daniel Gros, director of the Center for European Policy Studies in Brussels, on the impact of devaluation on tourism:

“But they’ve already cut prices and tourism has gone up. But it hasn’t really helped because total revenue hasn’t gone up.”

Actually tourism revenue has risen. It rose by 8.0 percent from 2011 to 2013 (the most recent data available) measured in euros and by roughly 20 percent measured in dollars. In arguing that Greece can’t increase revenue from fishing the piece tells readers:

“The European Union has strict quotas to prevent overfishing.”

However the piece also tells readers that leaving the euro would cause Greece to be thrown out of the European Union. If that’s true, the EU limits on fishing would be irrelevant.

The piece also make a big point of the fact that Greece does not at present have a currency other than the euro. There are plenty of countries, including many which are poorer than Greece, who have managed to switch over to a new currency in a relatively short period of time. While this process will never be painless, it must be compared to the pain associated with an indefinite period of unemployment in excess of 20.0 percent which is almost certainly the path associated with remaining in the euro on the Troika’s terms.

In making comparisons between Greece and Argentina, it is also worth noting that almost all economists projected disaster at the time Argentina defaulted in 2001. Perhaps they have learned more about economics in the last 14 years, but this is not obviously true.

I should have also mentioned that the pre-default decline has been much sharper in Greece than in Argentina, over 25 percent in Greece, compared to less than 10.0 percent in Argentina. This should mean that Greece has much more room to bounce back if it regains control over its fiscal and monetary policy.