Wrong Lessons from Latvia for the Eurozone

Latvia, a Baltic country of 2.2 million that most people could not find on a map, has suddenly gotten more attention from economists involved in the debate over the future of Europe and the global economy.  I responded in a column last week to remarks by Christine Lagarde, IMF Managing Director, who on June 5 said that Latvia’s policies in response to the economic crisis had been a “success story.”  Paul Krugman has also weighed in several times, and has been joined by Harvard international economist Dani Rodrik, and now by the IMF’s Chief Economist Olivier Blanchard.

The reason it’s important to have an honest and realistic assessment of what happened in Latvia is that for the first time since the country suffered the world’s worst economic losses during the world recession (2008-2009), there are mainstream voices suggesting as Lagarde did, that it “could serve as an inspiration for European leaders grappling with the euro crisis.” Prior to the last week or so, it was only right-wing economists such as Anders Aslund who were willing to even consider this idea.

This is terrible because if there’s one simple lesson that most of the world – if not the European authorities – seems to be learning from the prolonged crisis in Europe, it’s that fiscal tightening is not the proper response to a recession.  So I hope the reader will forgive me for including more technical detail than normal in what follows, because it is important to get this straight.

The first big question is whether Latvia could have done better with another strategy, which would have included a devaluation of its currency.  Blanchard says that we “we shall never know.”

Of course this is technically true, but not all that relevant.  For example, most economists would scoff at the idea, held by hardcore supply-siders, that if the U.S. Congress had given Ronald Reagan everything he asked for in terms of budget policy, the economy would have grown so fast that it would have  produced budget surpluses instead of huge deficits.

In the case of Latvia, we can compare their results under “internal devaluation” – keeping the exchange rate fixed and going through a deep recession to lower wages — to other countries that had financial crises and recessions associated with external devaluations.  These are shown in the table below.  As can be seen, some of these are large devaluations, with very severe financial crises – including the Asian financial crisis of 1997-99 (Indonesia, Thailand, South Korea, Malaysia) and Argentina (2001-2002). 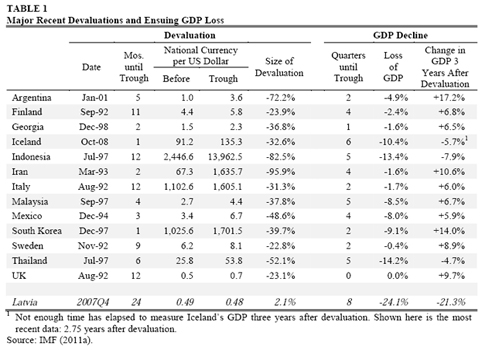 The Argentine case is in many ways analogous to the choice that Latvia was facing when its economy began to shrink.  Argentina tried an “internal devaluation” for three and a half years, and the economy continued to worsen.  After its default and devaluation in December 2001/January 2002, the country suffered a serious financial collapse. But it only lasted for one quarter and was followed by rapid growth; within three years the country was back at pre-crisis GDP.

The table shows that Latvia’s decline under its austerity strategy was quite severe not only compared with Argentina, but to all of the other countries that devalued.  On average, they lost about 4.5 percent of GDP, while Latvia lost 24 percent.  Similarly, three years after devaluing, the average economy was up  6.5 percent of GDP from its pre-devaluation level of output, while Latvia was down 21.5 percent three years after its recession began; as Blanchard points out, it is still down 15 percent today.  And according to IMF projections, it will take a full decade (until 2017) to reach pre-crisis GDP.

Of course every case is different, and some countries, for example, adjusted current account imbalances before they devalued. But Latvia’s losses have been huge by any comparison with countries that devalued.   Blanchard’s statement that Latvia “satisfies some definition of success” because the economy is recovering, is misplaced.  I also disagree with Dani Rodrik’s  more qualified conclusion that it is “too early to say Latvia has been a failure.”  I think the relevant comparison is with what the country could have done – not whether the economy eventually recovered.  Almost all economies do eventually recover.

Blanchard lists a number of reasons why Latvia’s strategy wouldn’t work in the eurozone, and these are valid.  But it is important to see that the policies didn’t lead to recovery in Latvia, either. In fact Latvia might still be in recession if the government hadn’t abandoned the austerity policies that plunged the country into depression.

But the Latvian government didn’t do the huge budget tightening that it promised the IMF in 2010.  Rather, the deficit was reduced after the economy started growing again.  This is also vitally important when considering whether the strategy “worked.” And there was also a burst of unanticipated inflation that changed the government’s monetary policy – which had been overly tight because the government was committed to keeping the pegged exchange rate – and lowered its debt burden.

Finally, the Latvian economy pulled out of recession without any help from its trade balance.  This completes the argument that “internal devaluation” didn’t work.  For an internal devaluation to work, the steep recession would have to lower labor costs enough to increase exports and/or reduce imports, to boost the economy through an improving trade balance.  Krugman provides further evidence that this didn’t happen, and isn’t happening in the eurozone.

Ironically, although Blanchard doesn’t say it explicitly but rather hints at it, the IMF itself was opposed to the Latvian government’s strategy, and favored devaluation.  Although devaluation also has costs and risks, if the IMF and European authorities were willing to provide funds to help manage the transition, it is likely that Latvia would have done even better than other countries in similar situations.  Of course the Fund may have been overruled in any case, since the Swedish banks – which own much of Latvia and also have a strong influence among the European authorities – may have rejected this route because of the losses they would have taken on lending there.

But the bottom line is that no country with three times the unemployment rate that it had before the world recession, and Latvia’s huge income losses, should be considered even a qualified success story.  It would be a shame if these unwarranted conclusions from Latvia’s experience were to help prolong the unnecessary suffering in the eurozone.

November Data Shows More Countries Are Using Special Drawing Rights; Over 30 Countries Have Actively Used Most of Their New SDRs